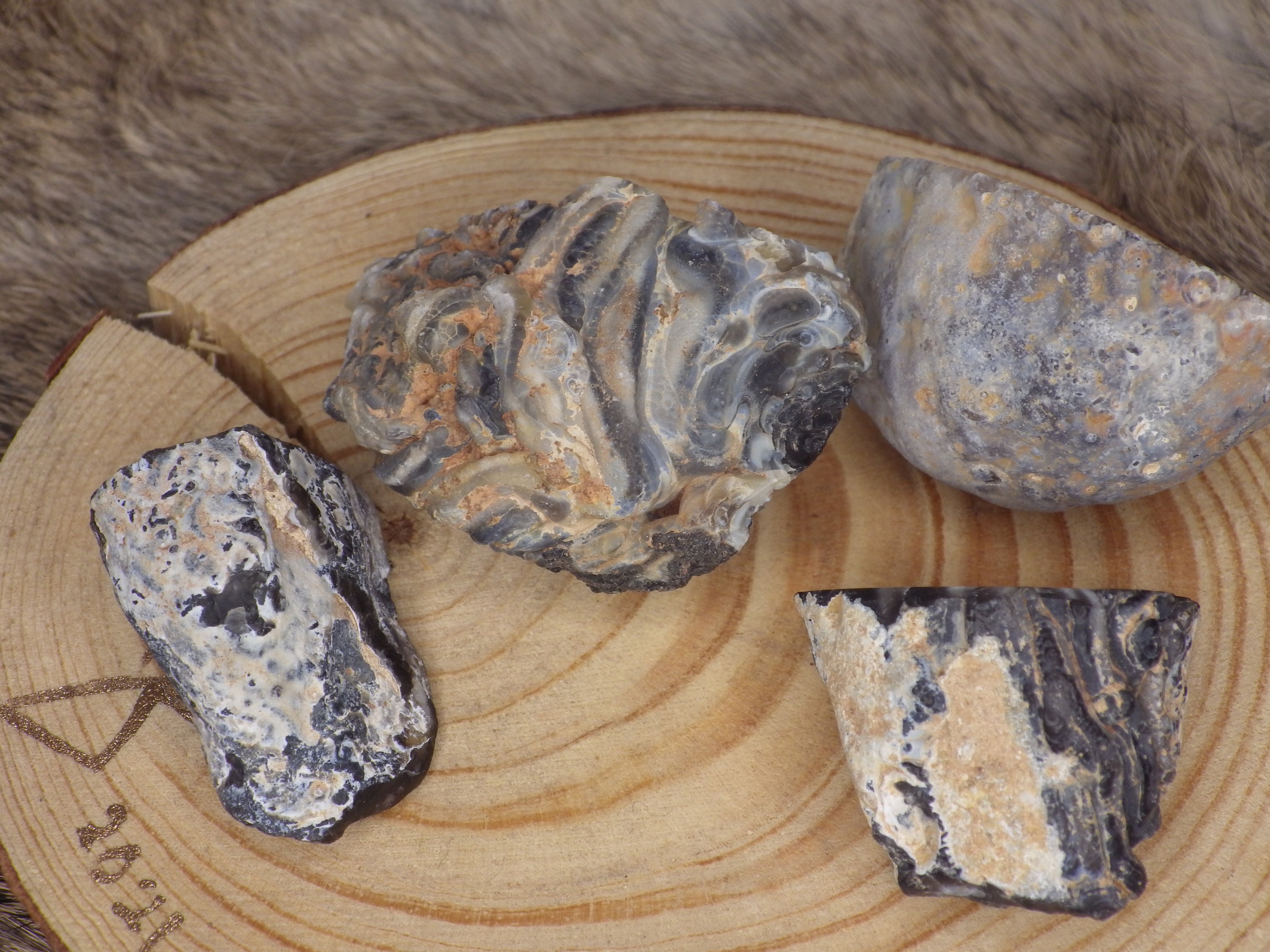 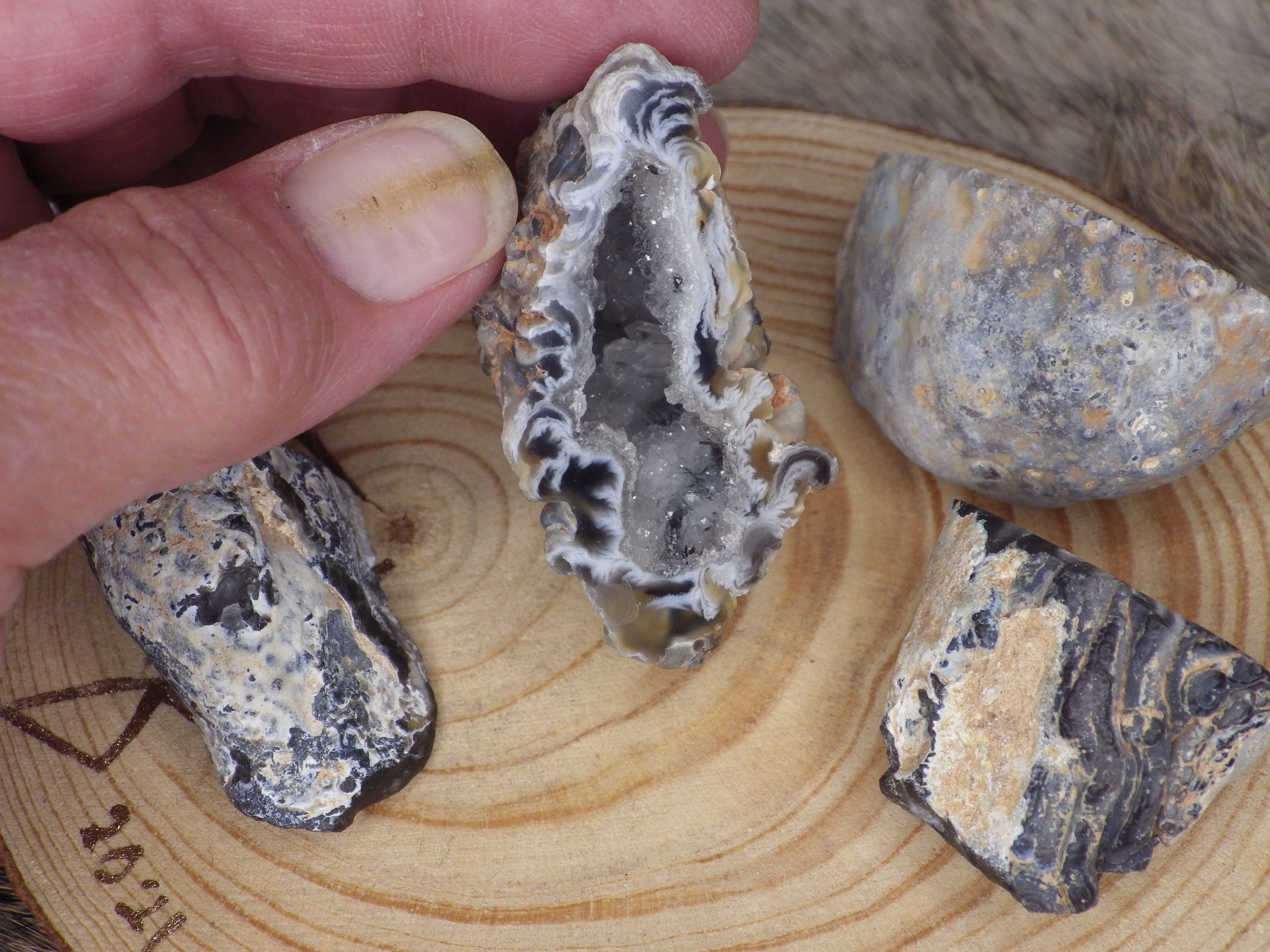 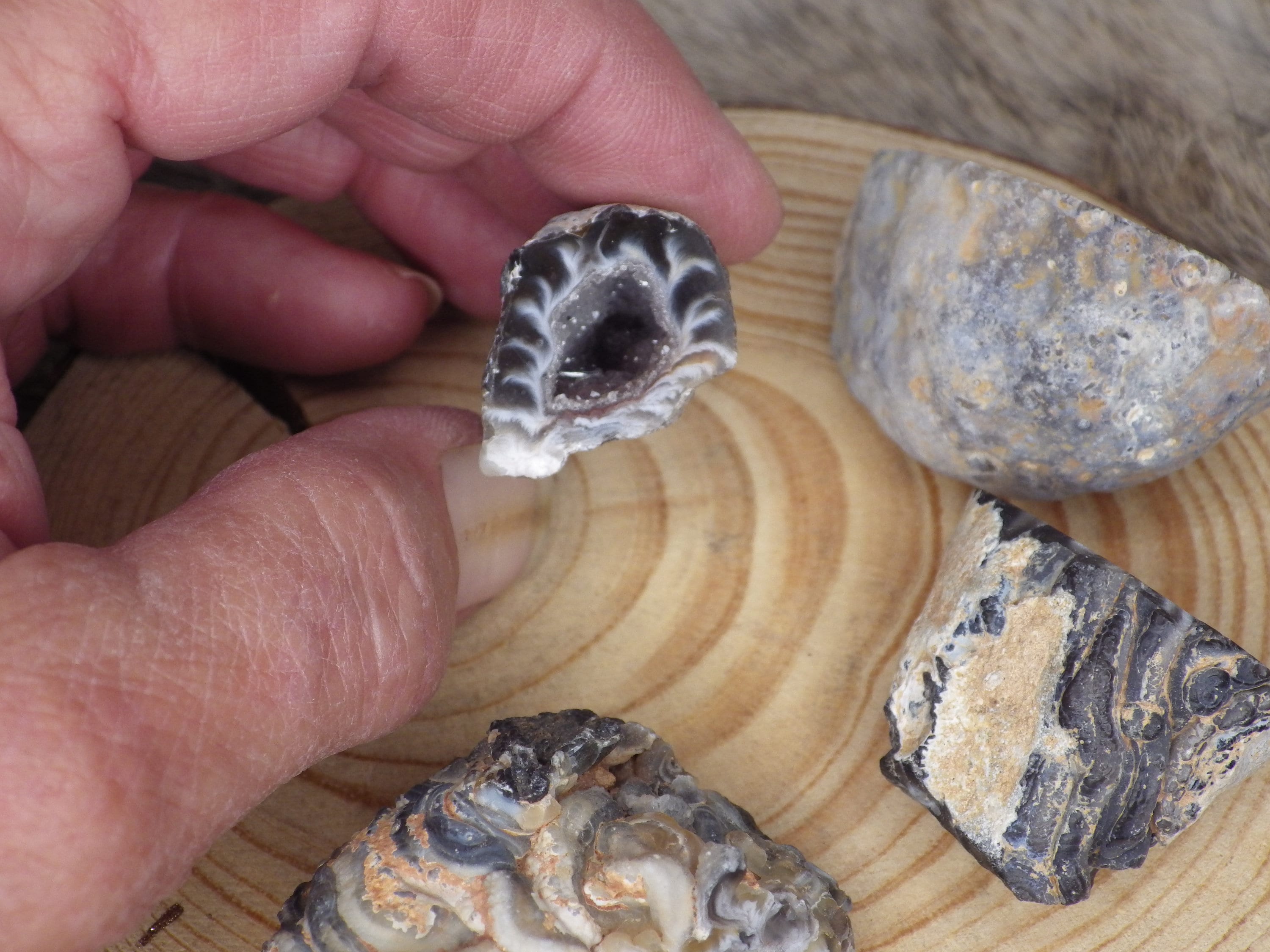 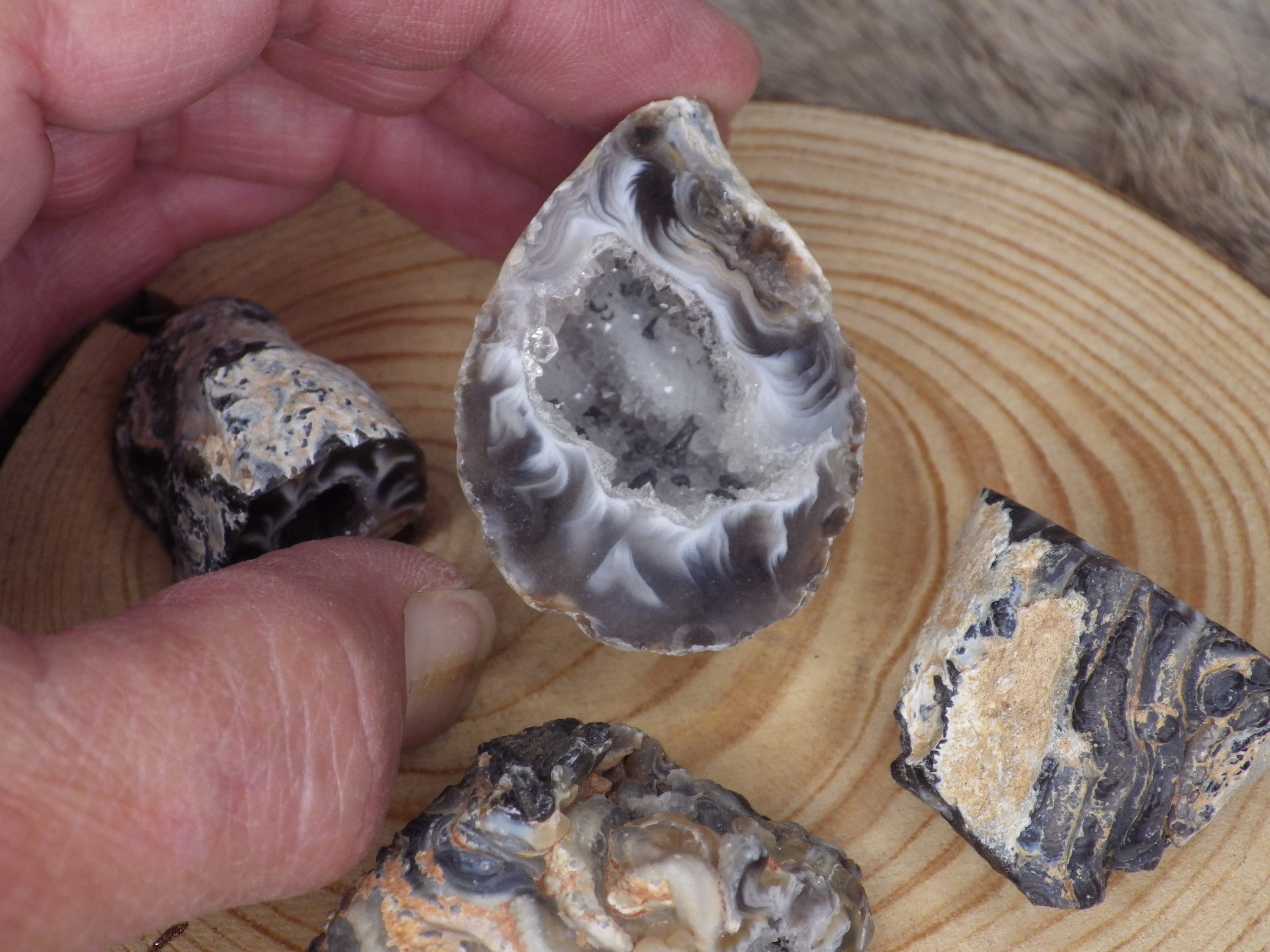 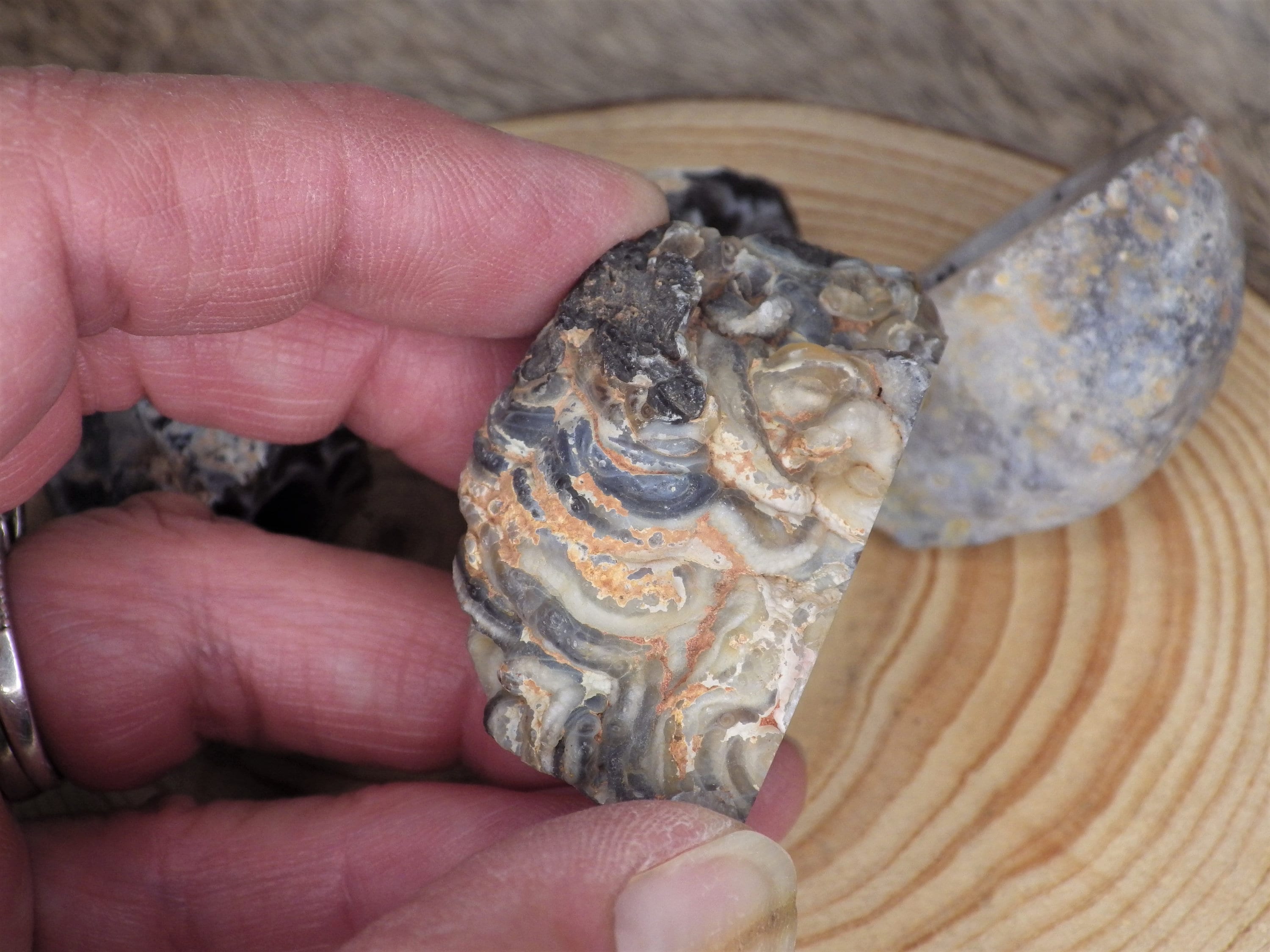 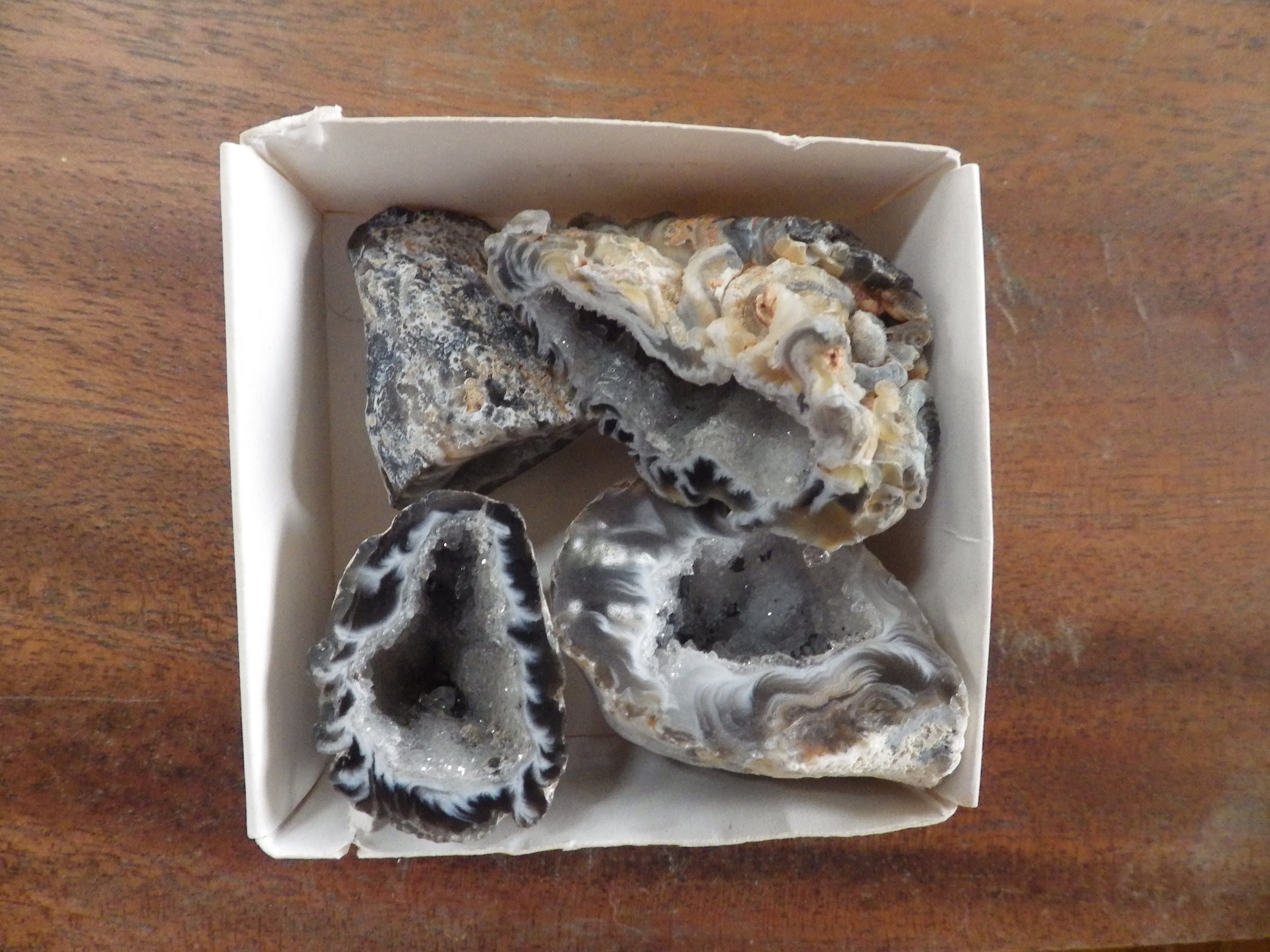 Agate is the name given to numerous varieties of banded Chalcedony, a mineral of the Quartz family. Its name comes from the Achetes River in Sicily, where Agates were first found. Usually banded in layers, or stripes, some varieties have “eye” markings, or specks of color, some have fossilized inclusions, and others are solid. Called the earth rainbow, the concentric bands of Agate form in nearly every color the earth can produce, including a colorless form.

Metaphysically, Agate has a lower intensity and vibrates to a slower frequency than other stones, but is highly regarded as a stabilizing and strengthening influence. [Simmons, 6] The layered bands of microscopic quartz in Agate may appear delicate, they are actually very strong. Agate is excellent for balancing emotional, physical and intellectual energy, and in harmonizing yin and yang, the positive and negative forces of the universe. [Hall, 39]

Agate promotes inner stability, composure, and maturity. Its warm, protective properties encourage security and self-confidence. It is a great crystal to use during pregnancy. [Gienger, 7] Agate also helps new mothers avoid the “baby blues” sometimes experienced after giving birth, and an Agate jewel worn between the breasts encourages lactation. [Megemont, 15]

Agate stops the burning desires for things we do not need, and assists those juggling commitments or multiple jobs. It helps writers express ideas in marketable form, and helps young children learn to walk and not fall as they get older. [Eason, 305] Agate also promotes marital fidelity. [Meloldy, 82]

Agate is useful as a protection amulet when traveling, and is especially effective against traffic accidents. [Megemont, 16]

As a professional support stone, Agate stabilizes the imagination and inspiration of artists, provides personal security for police, telephone workers, cooks, chefs and bakers, and protection from falling objects for builders and construction workers. It provides physical strength and endurance for dancers, dentists, and environmentalists, and emotional endurance for educators and recreational workers. [Mella, 129-133]

You will receive this exact box lot weight 5.6 oz