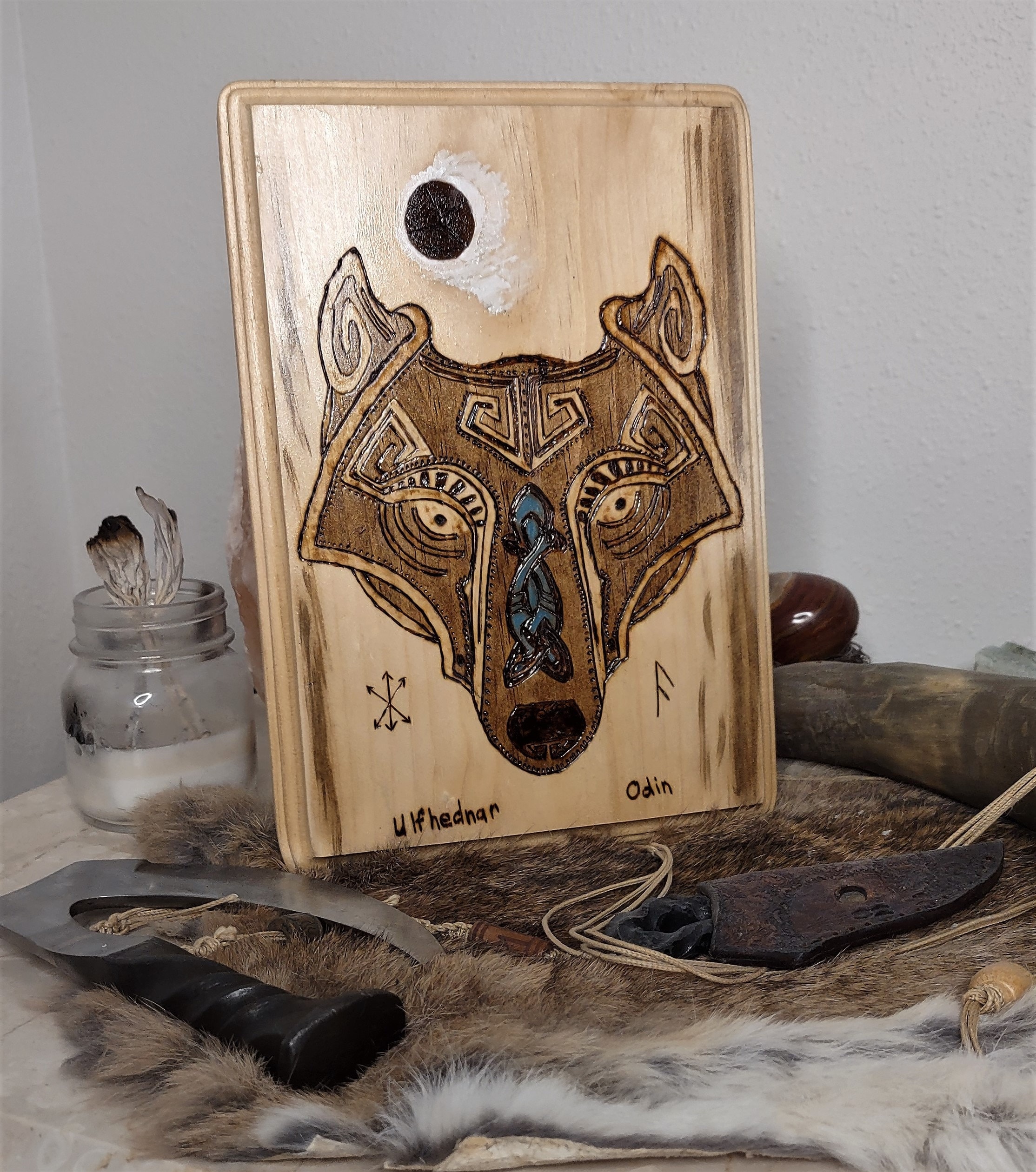 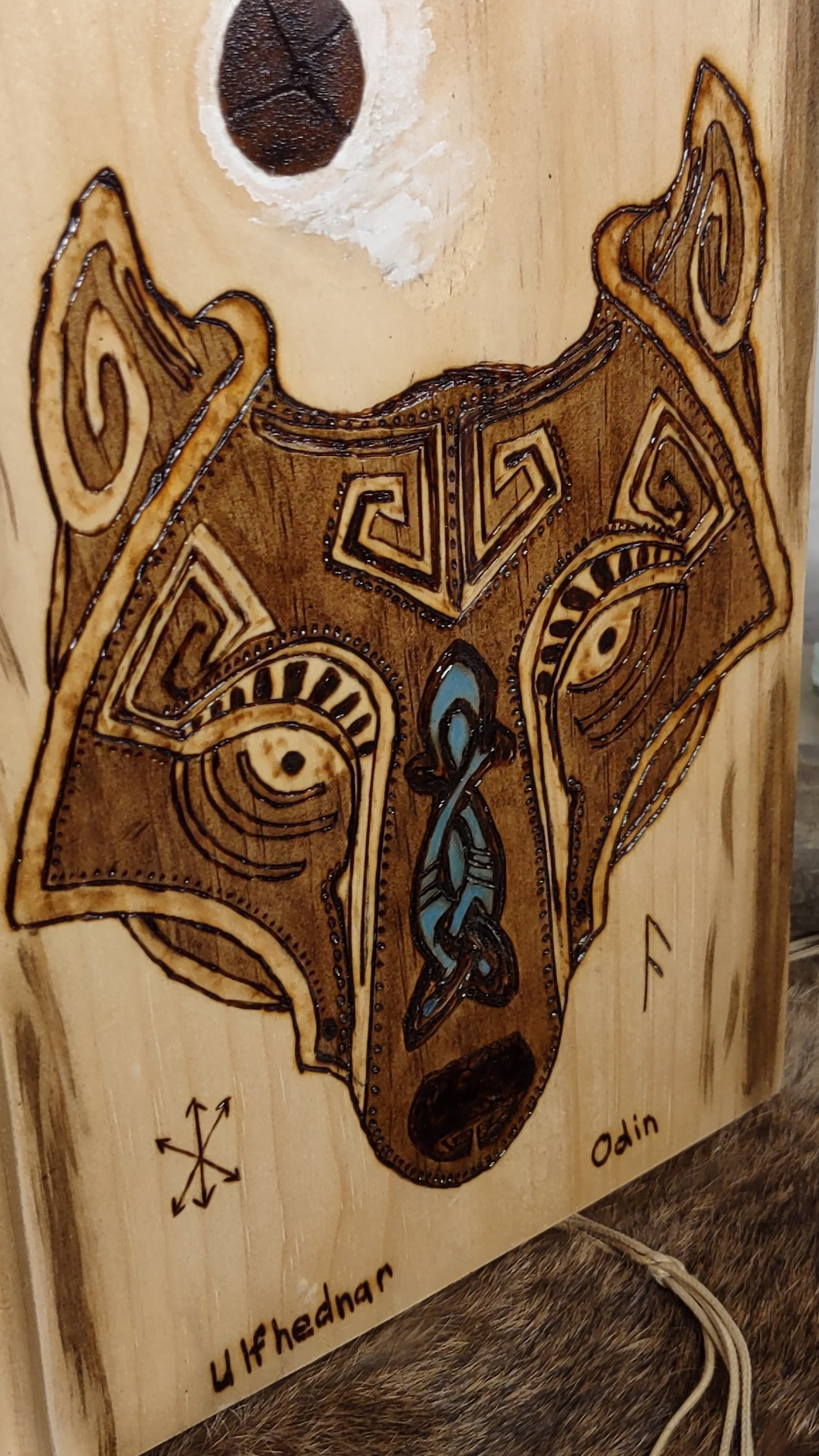 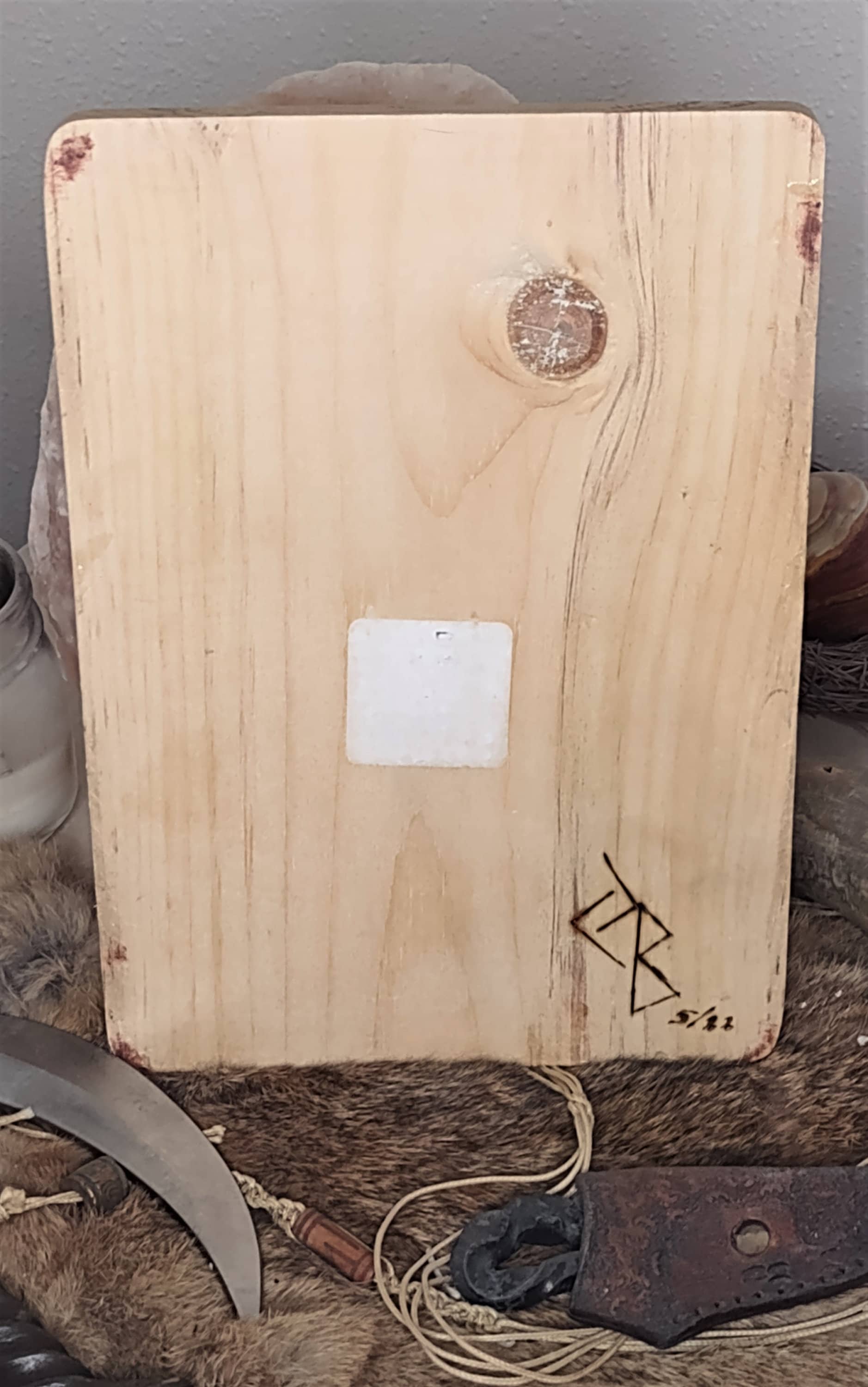 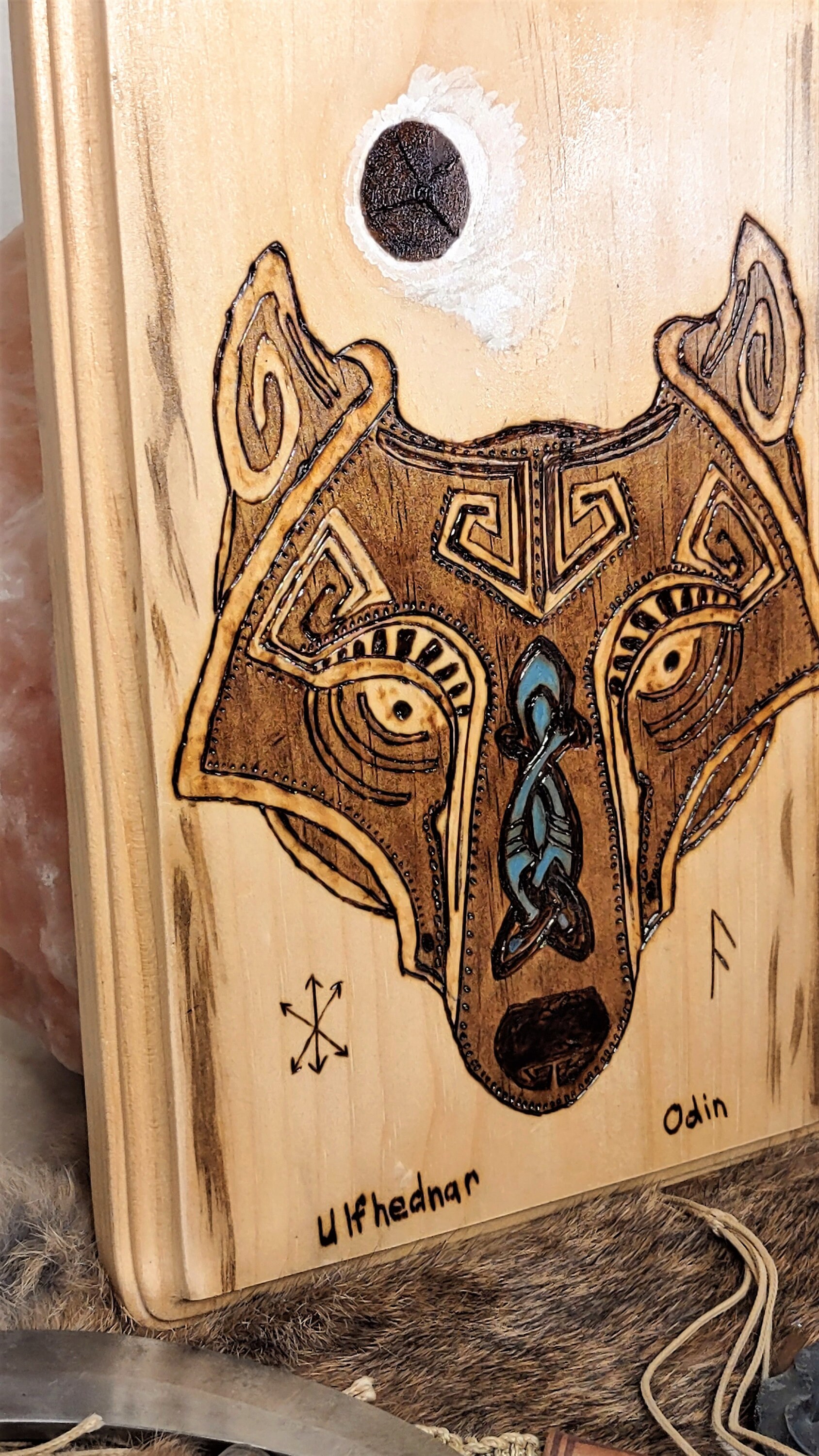 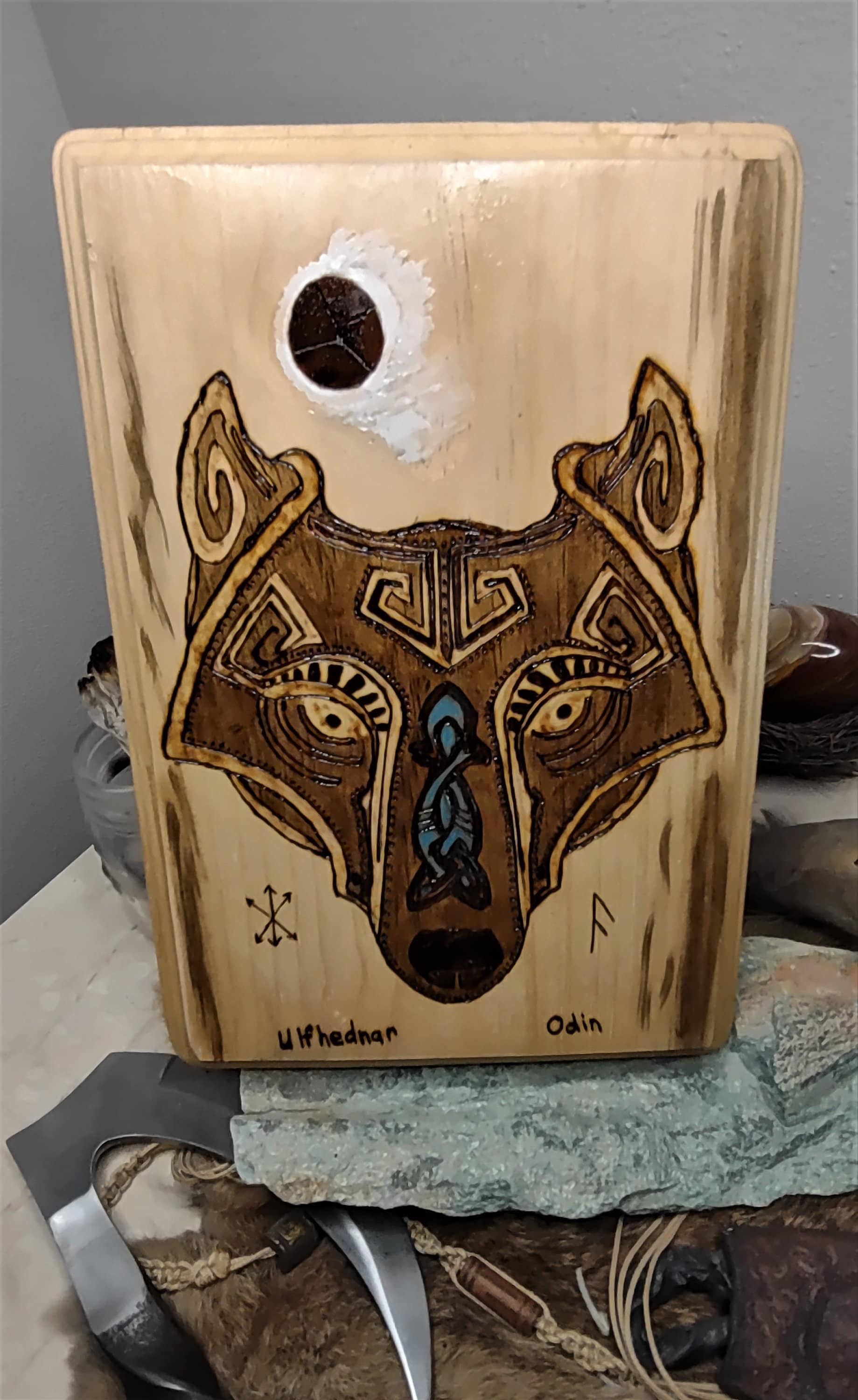 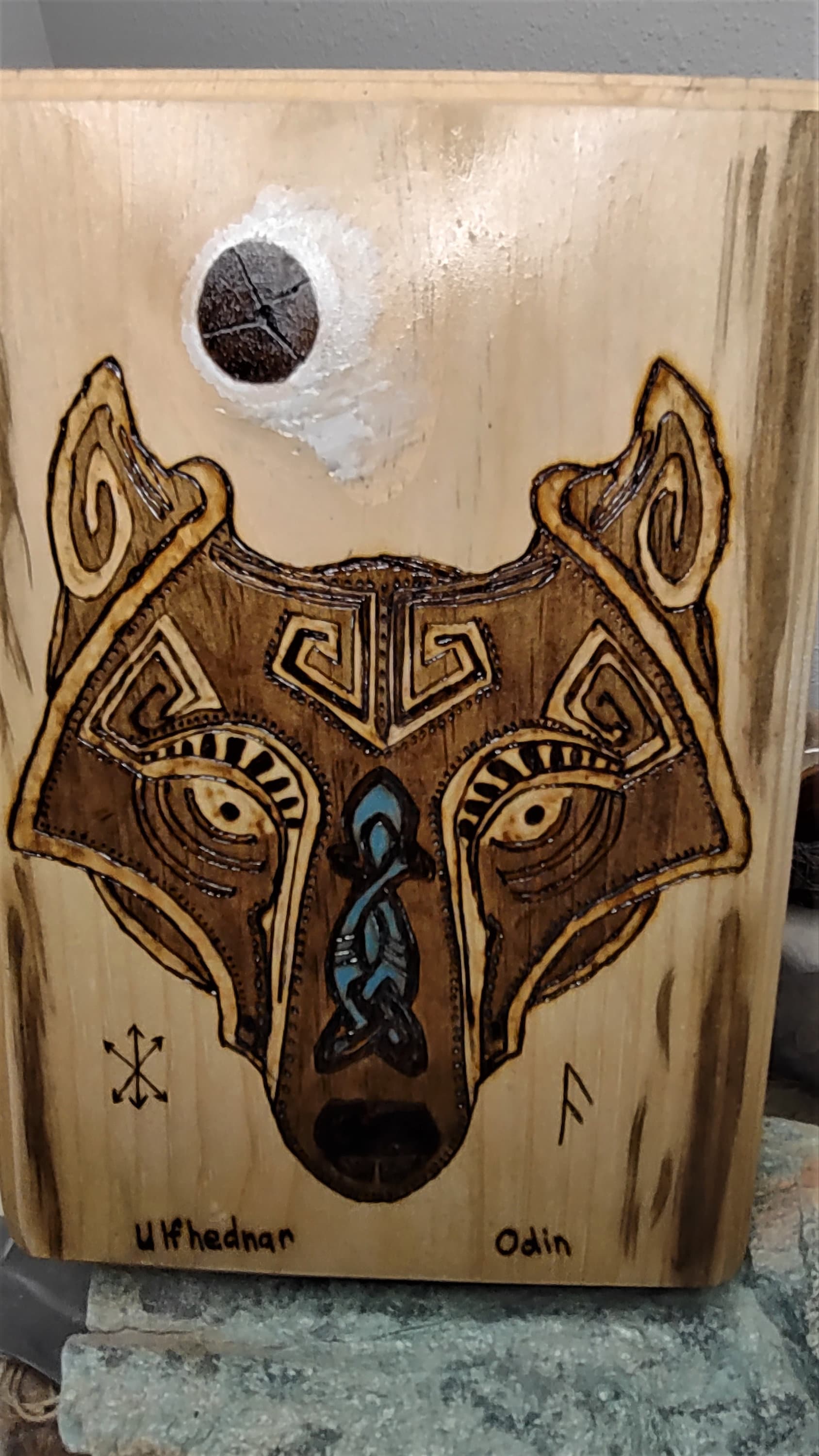 Original design, hand crafted, pyrography on wood, that has been sealed with urethane to preserve its beauty.

There is nothing more inspiring to those who follow the old religions, than the wolf. The wolf lives in packs (tribes), defends it's community members and is a fierce hunter and fighter. Although they live in packs, a wolf will often go out scouting and hunting on it's own. Hyper vigilant, quiet and intent of purpose, they often locate their quarry long before the others join for the kill. These are instincts, primal, powerful instincts. The Berserker and Ulfhednar of Odin are such beasts.

Wolf warriors appear among the legends of the Indo-Europeans, Turks, Mongols, and Native American cultures.[18] The Germanic wolf-warriors have left their trace through shields and standards that were captured by the Romans and displayed in the armilustrium in Rome.
The first Norwegian king Harald Fairhair is mentioned in several sagas as followed by an elite guard of ulfheðnar. They were said to wear the pelt of a wolf when they entered battle.[20][22] Ulfheðnar are sometimes described as Odin's special warriors: "[Odin's] men went without their mailcoats and were mad as hounds or wolves, bit their shields...they slew men, but neither fire nor iron had effect upon them. This is called 'going berserk'."[14]: 132  In addition, the helm-plate press from Torslunda depicts a scene of Odin with a berserker with a wolf pelt and a spear as distinguishing features: "a wolf skinned warrior with the apparently one-eyed dancer in the bird-horned helm, which is generally interpreted as showing a scene indicative of a relationship between berserkgang ... and the god Odin".[23][24

It is said in Norse tradition that all men were trained to fight, some were chosen to be warriors and some were born Berserker or Ulfhednar. I believe that if a man possesses speed, strength and skill with weapons, he can be trained to be a great warrior. I also believe that those who are Ulfhednar, or Special Forces if you prefer, are born with skills that cannot be taught.