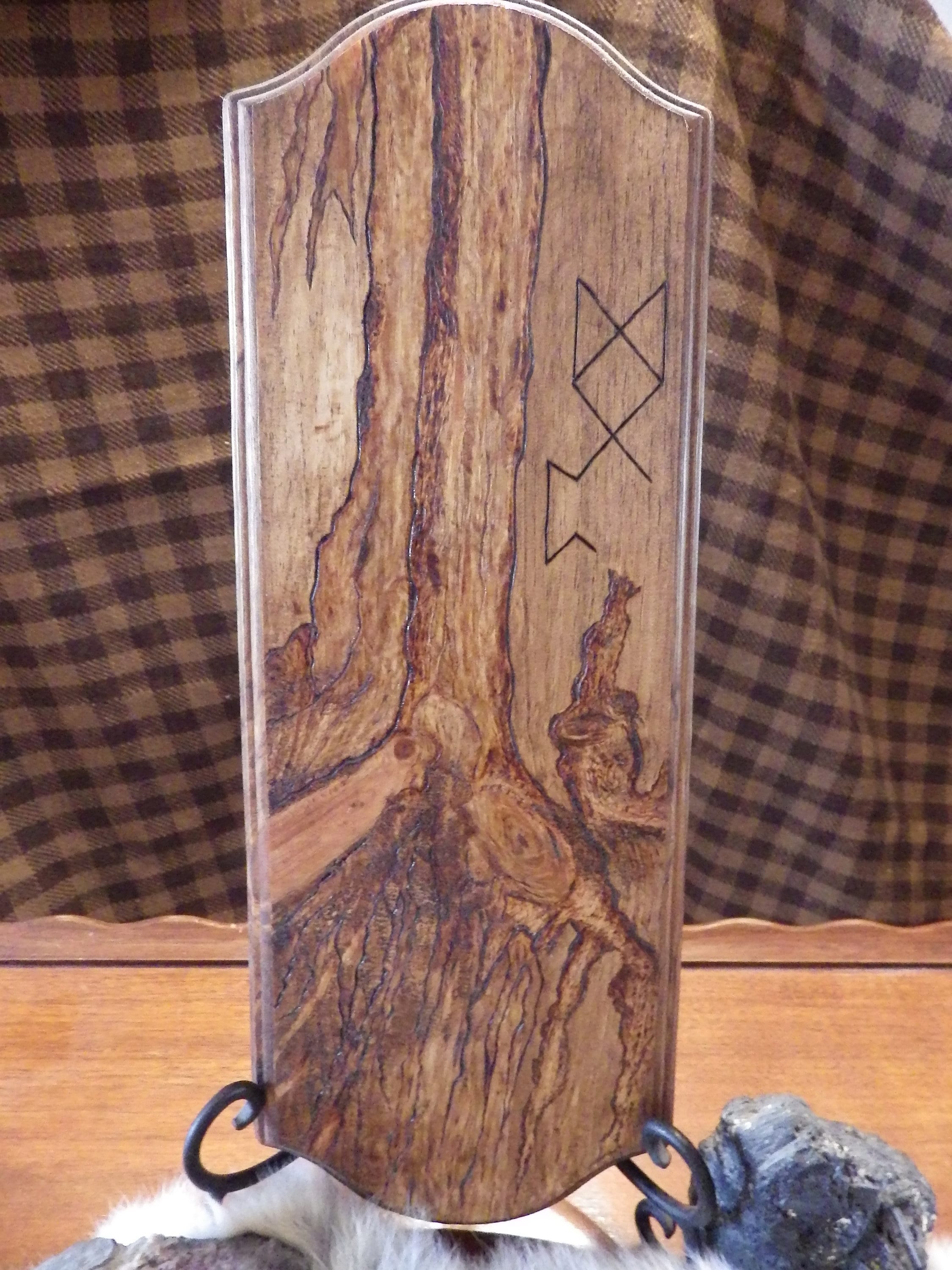 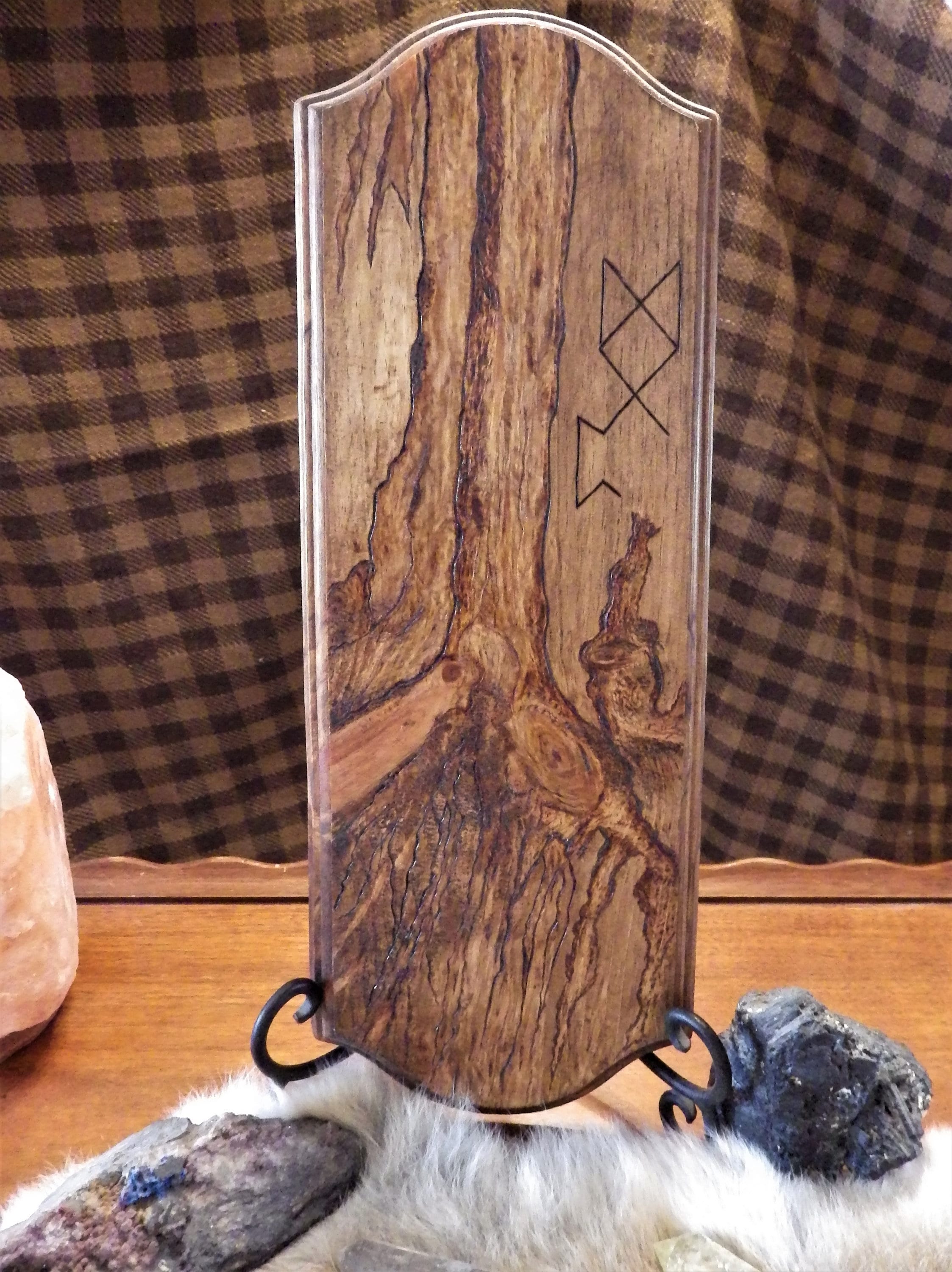 ANCIENT ROOTS - From the roots

ANCIENT ROOTS - From the roots

Original handcrafted design carved into pine using pyrography. Stained and protected with Tung oil for long lasting beauty. There is only one!

" I know an ash that stands called Yggdrasil, a tall tree wet with white dews, dews dripping down to the dales. Ever green it stands over Urdh's well. From there come three maiden's, deep in lore, from the water that stands under the tree. One is called Urdh, the other Verthandi, the third Skuld. Scores they carved, laws they laid, lives they chose. They worked orlog for the sons of men."

Yggdrasil holds all that has ever been from Ymir (the body of Yggdrasil) the set form and space, to Audhumbla the powers of all things that flow back and forth within the tree. Many think of life as that which was, that which is and that which may become. This separates man from the past. In truth we are the culmination of all that went before us and it continues to live in us, for without all the actions and choices of the past we would not exist. Future is actually "that which is becoming" defined by actions and choices made in this very moment. All existing continually in that which constantly flows. In the same right, the year was viewed as the time of light and the time of darkness, and the day was not a twenty four hour period but sunrise to sunset and sunset to sunrise. These distinctions are important to comprehend in order to understand what is held within this mighty tree.

Pertho, the most guarded of the runes, it is the cultic symbol of the secret of Orlog - the mystery of Wyrd. A synthesis of the laws of cause and effect and the laws of synchronicity. Causality is the law of the horizontal plane and synchronicity is the vertical axis of consciousness. The idea of Wyrd (and of Orlog) also partakes of this synthesis of horizontal and vertical reality. Wyrd actually means "that which has become" and orlog "primal layers of action" which shows the importance of history, tradition and past actions. In Germanic and Odinic thinking there is only past and present as the future is a mass of all-potential for becoming. What that future is is based on traditions, past action and present choice. This is poured from the cup, pertho.

Othala shows us the importance of that ancestral heritage, the inheritance, the kynfylgja, the traditions that created the potential for our existence. It also represents that which is set apart and made sacred. Othala describes the essence of the mystery of the ebb and flow between states of chaos and order - the great cosmic state of flux. However it celebrates the state of balance obtained when forces of consciousness have established their enclosures interacting with the powers of the exterior darkness.

Dagaz is the process that takes place at the edges of extremes. It is the "Odhinic paradox" - the sudden realization (after concerted conscious effort of the will) that perceived opposites are aspects of a third idea that contain them both. This is the mystery of Hyperconsciousness central to the Odhinic and Germanic cult of consciousness. We do not seek the mystery of Dagaz at the center, but at the extreme borders. It is from these extreme borders that the pathway between extremes is found.

Synopsis: Our pathway to higher levels of consciousness is found in the well of our heritage, deep beneath our ancestral tree of inheritance. From there we may uncover the layers of past action, the strength of our heritage and also it's folly. This wisdom, drawn up through the roots of Yggdrasil, is held and protected within the walls of Othala, the sacred innangard where the ebb and flow between chaos and order is maintained in balance. It is from this foundation, and understanding of heritage, inheritance and sacredness, that we can begin to explore the edges of extremes. It is this exploration that is so vital at this time in history. We are walking the edges of extremes, in the midst of chaos and the task at hand is to find the pathway through the center and to reach a higher level of consciousness.

May this work aid you in your search