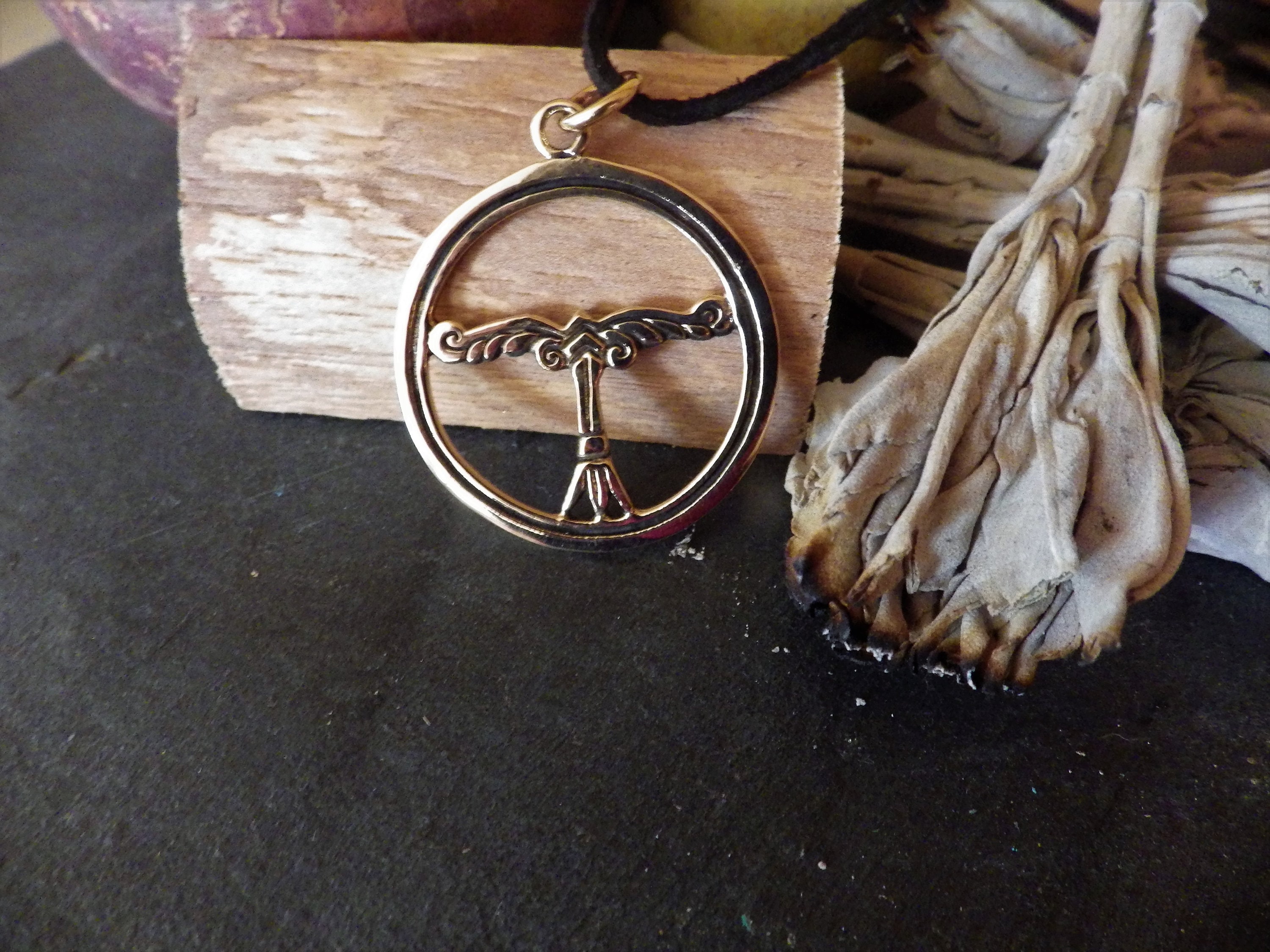 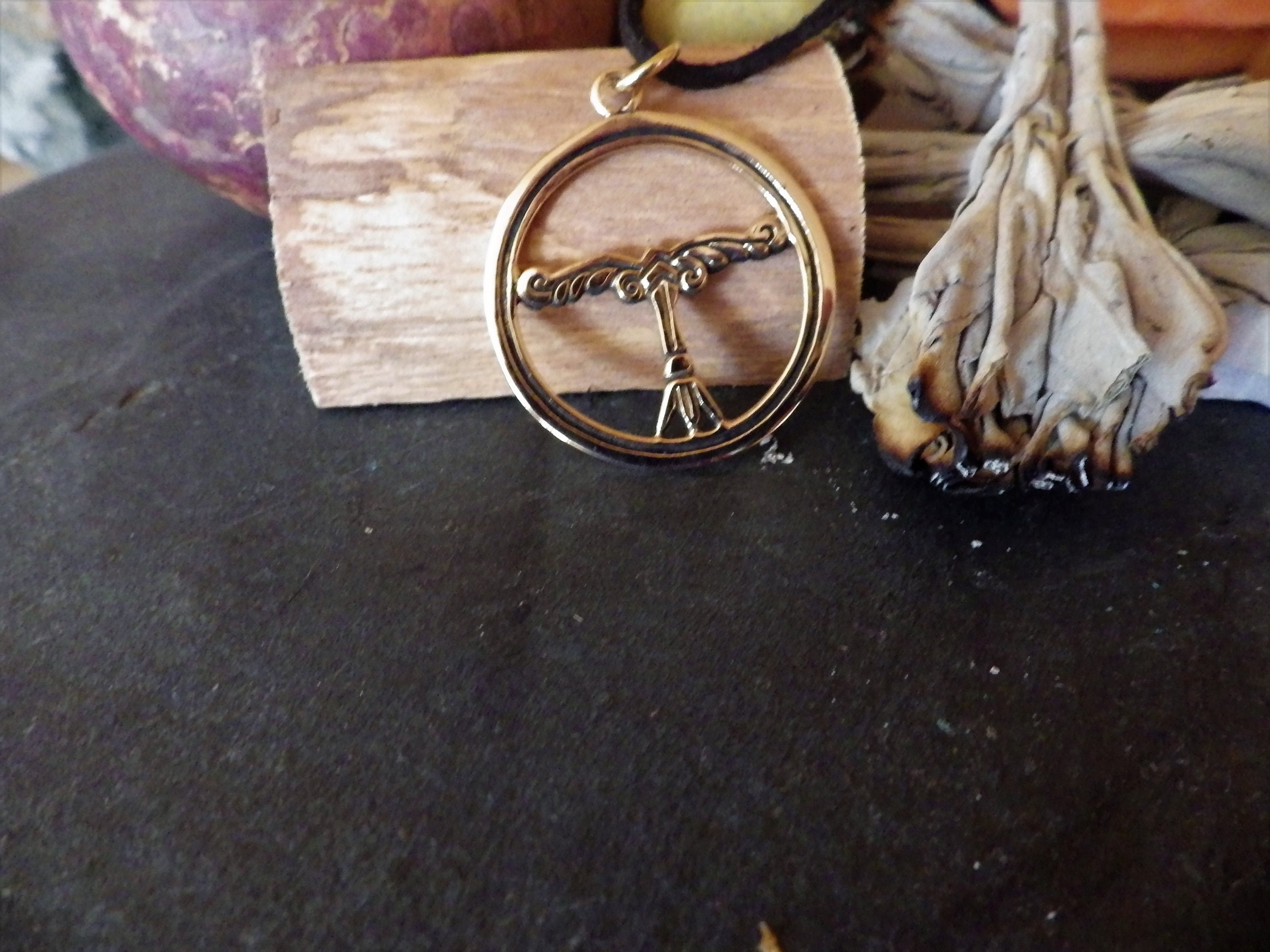 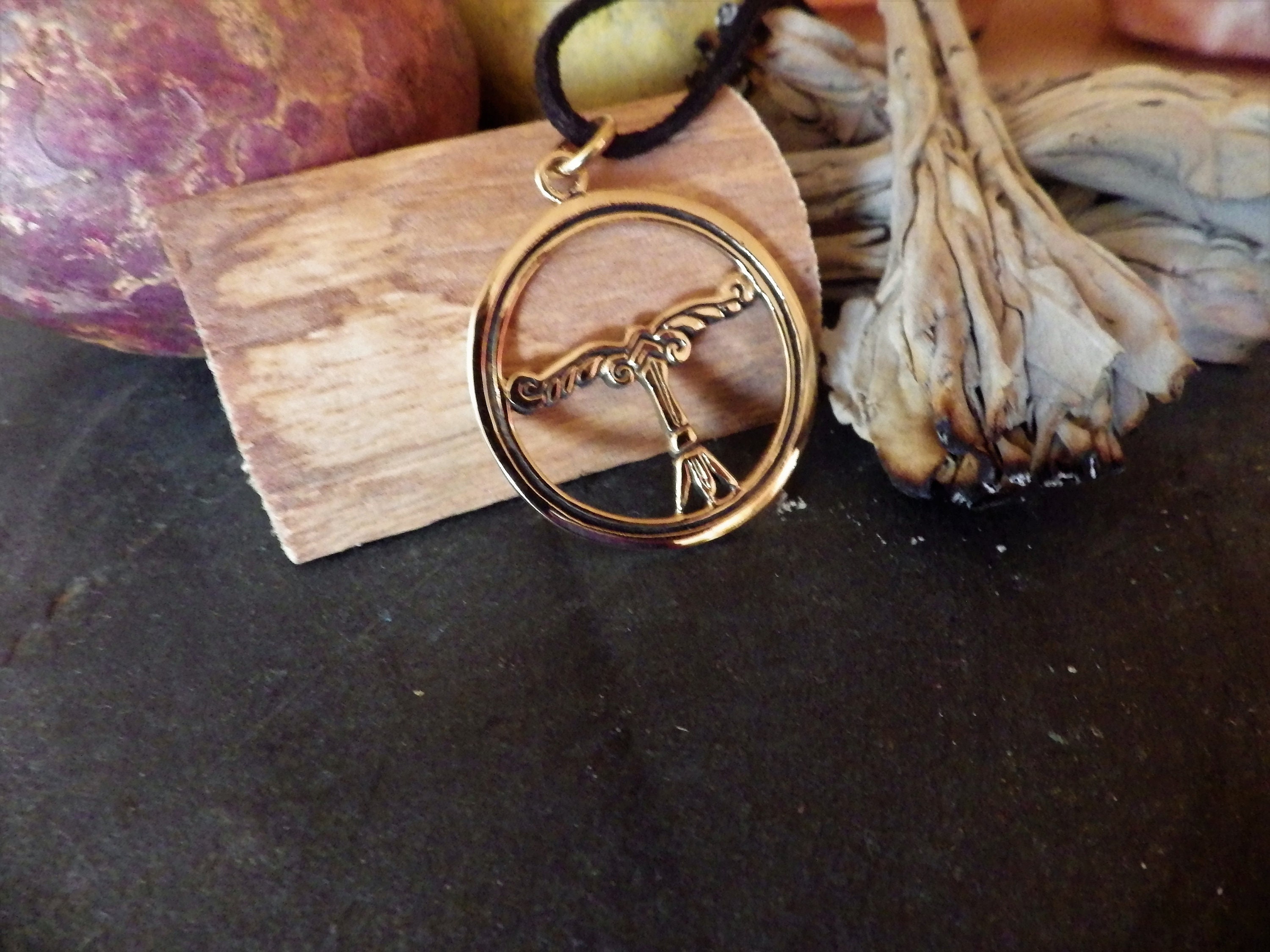 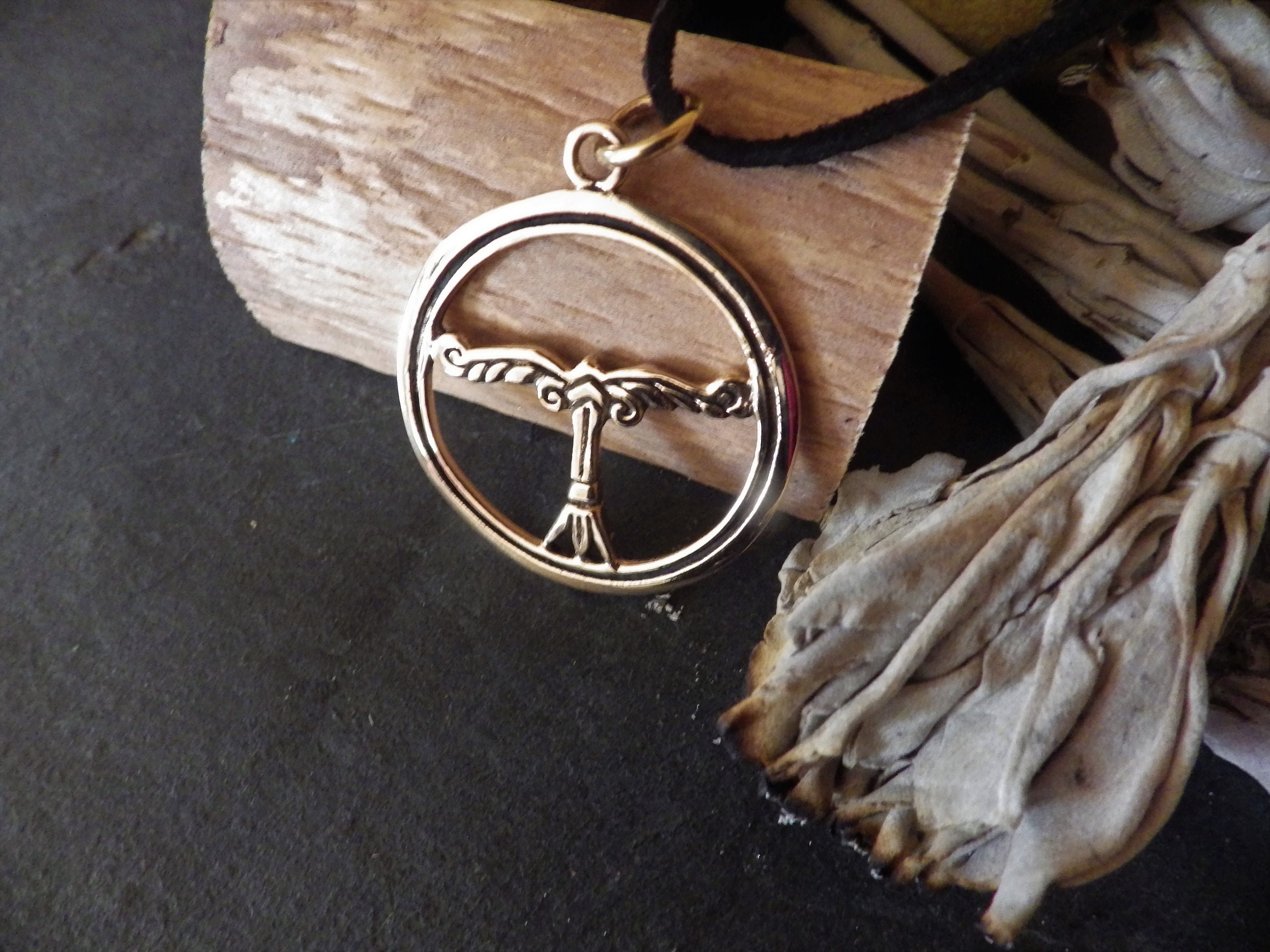 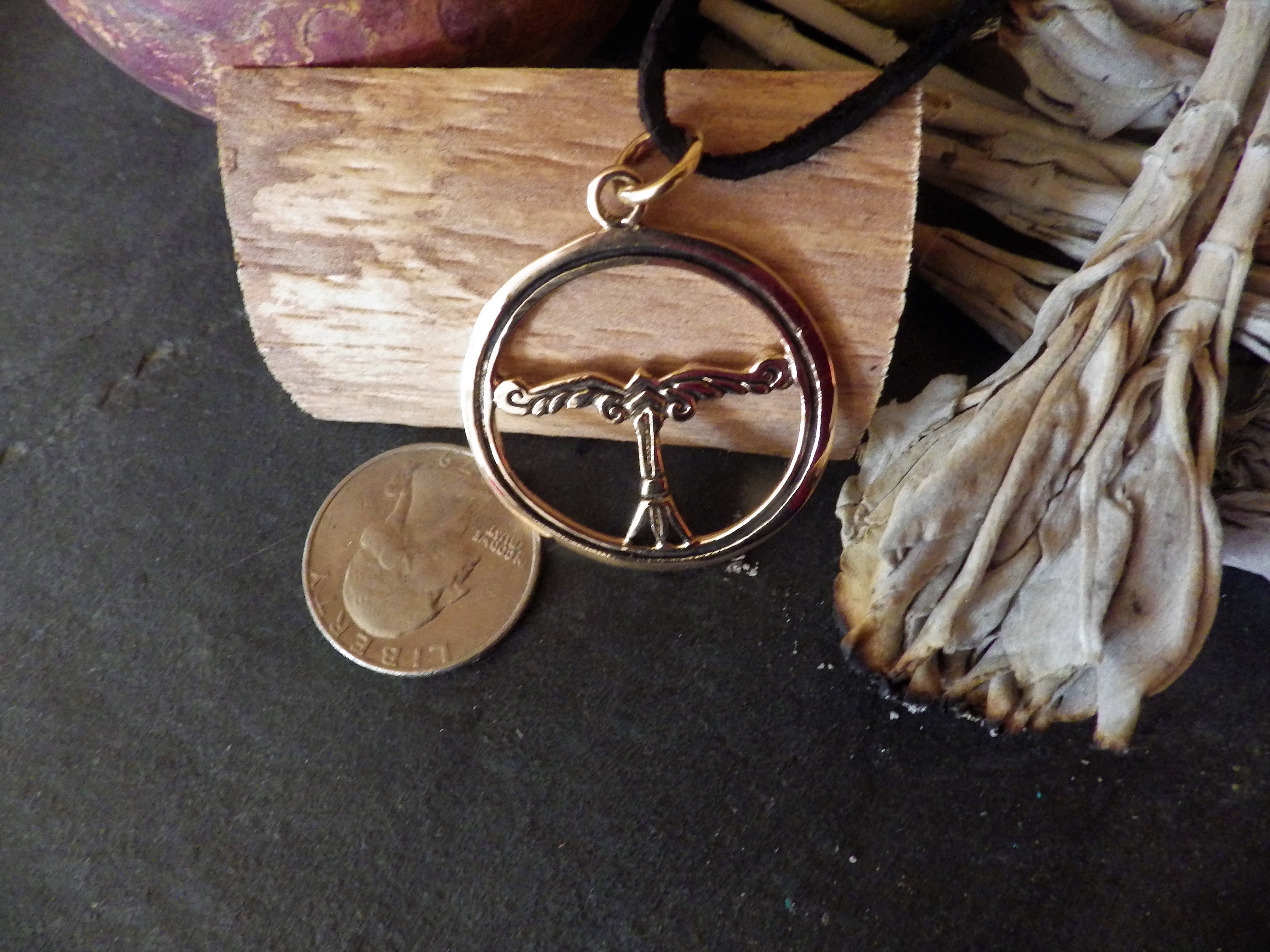 IRMINSUL, bronze viking pendant. Irminsul is a symbol of the germanic pagan faith of the old Saxons. Irminsul presents the legendary pillar, and its name comes from the germanic god Irmin, which is associated with the norse god Odin and Tyr. Size approx. 3.5 cm in diameter

• The Irmin component of the name is an Old Saxon adjective that transliterates as “colossal strength” or “Great/strong ”. Irminsul in its literal interpretation potentially refers to the Germanic spiritual concept of spiritual pillars, Irminsuls which are pillars that were used as totems, or statues of worship in the classic shape.
• The name Irmin potentially refers to one of the alternate regional Old Saxon names for Tyr or more realistically with Woden/Wotan/Odin. As the Old Norse attested equivalent of Irmin is Jörmunr which is a name/title ascribed to Woden/Wotan/Odin.
• It should be noted that through Old Norse alone over 220 names of deities have been attributed to different aspects or titles for Odin alone, such as Grim, Hárr, Gondlir and Jörmunr. Factor in all the Old English, Old German and regional variations, the names of Odin must over our entire history have numbered into the thousands.
• Or Irminsul is alternatively of the tribal Gods specifically created by the specific German tribes that share Irmin in their name, which could additionally simply be their name for Wotan/Woden/Odin.
• Irminsul refers also to Yggdrasil through this connection to Irmin/Jörmunr who is also consistently attested to as being represented by the name Yggr, which forms an integral component of Yggdrasil, which actually means “Yggr’s steed”, from which Yggr(Woden) hung himself from for nine nights to obtain the Runes.

Love them so much I bought three of them!