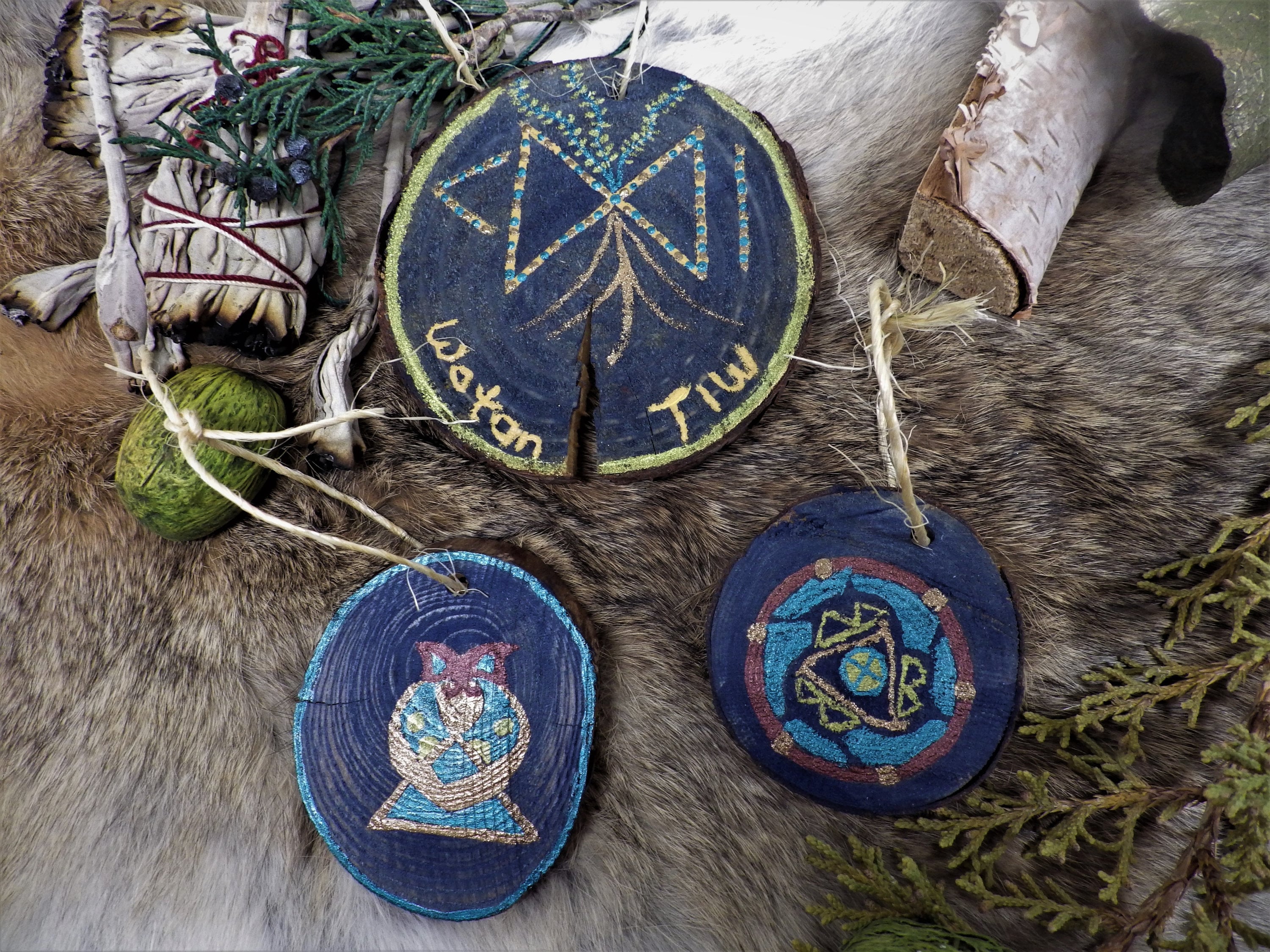 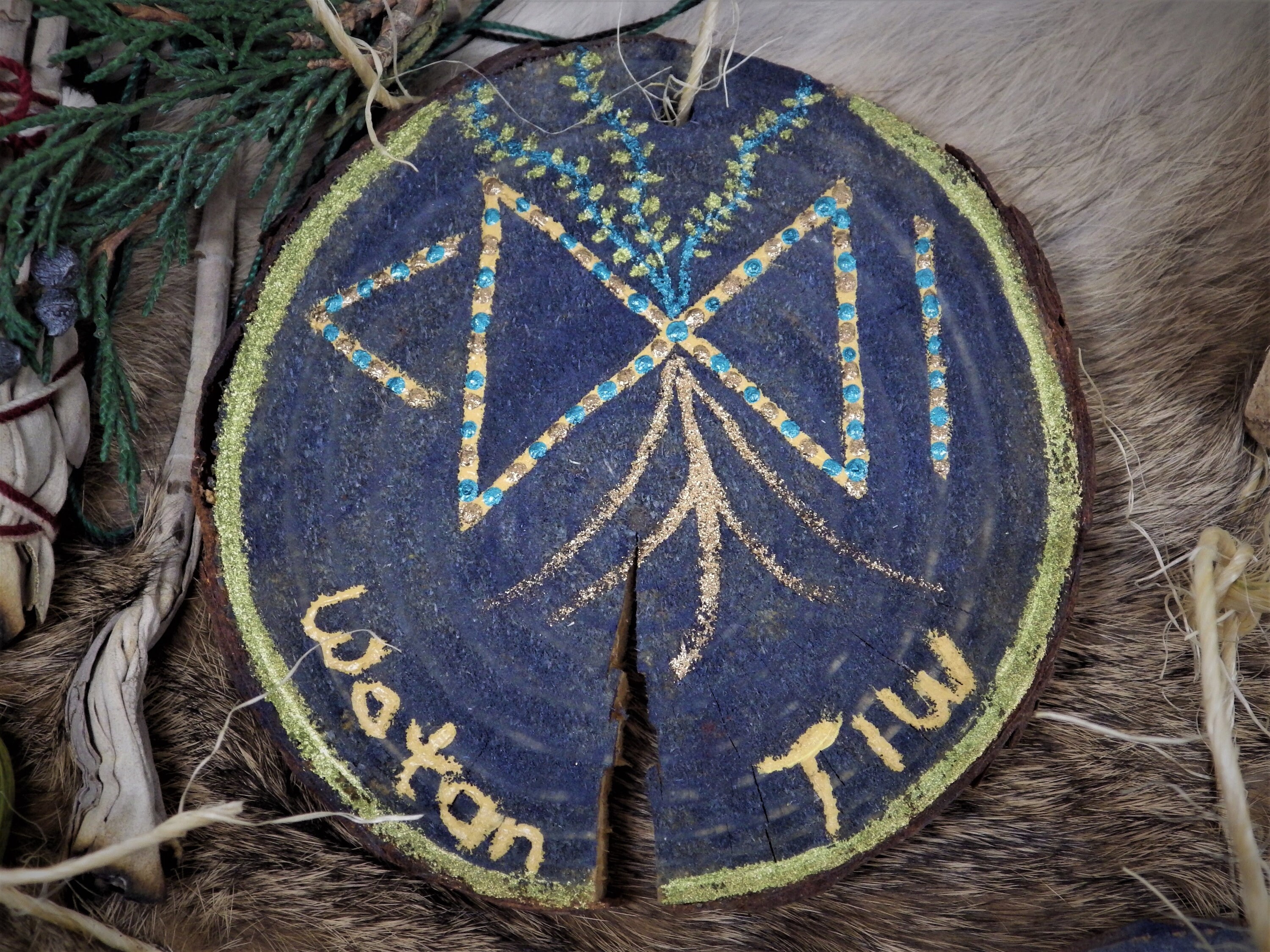 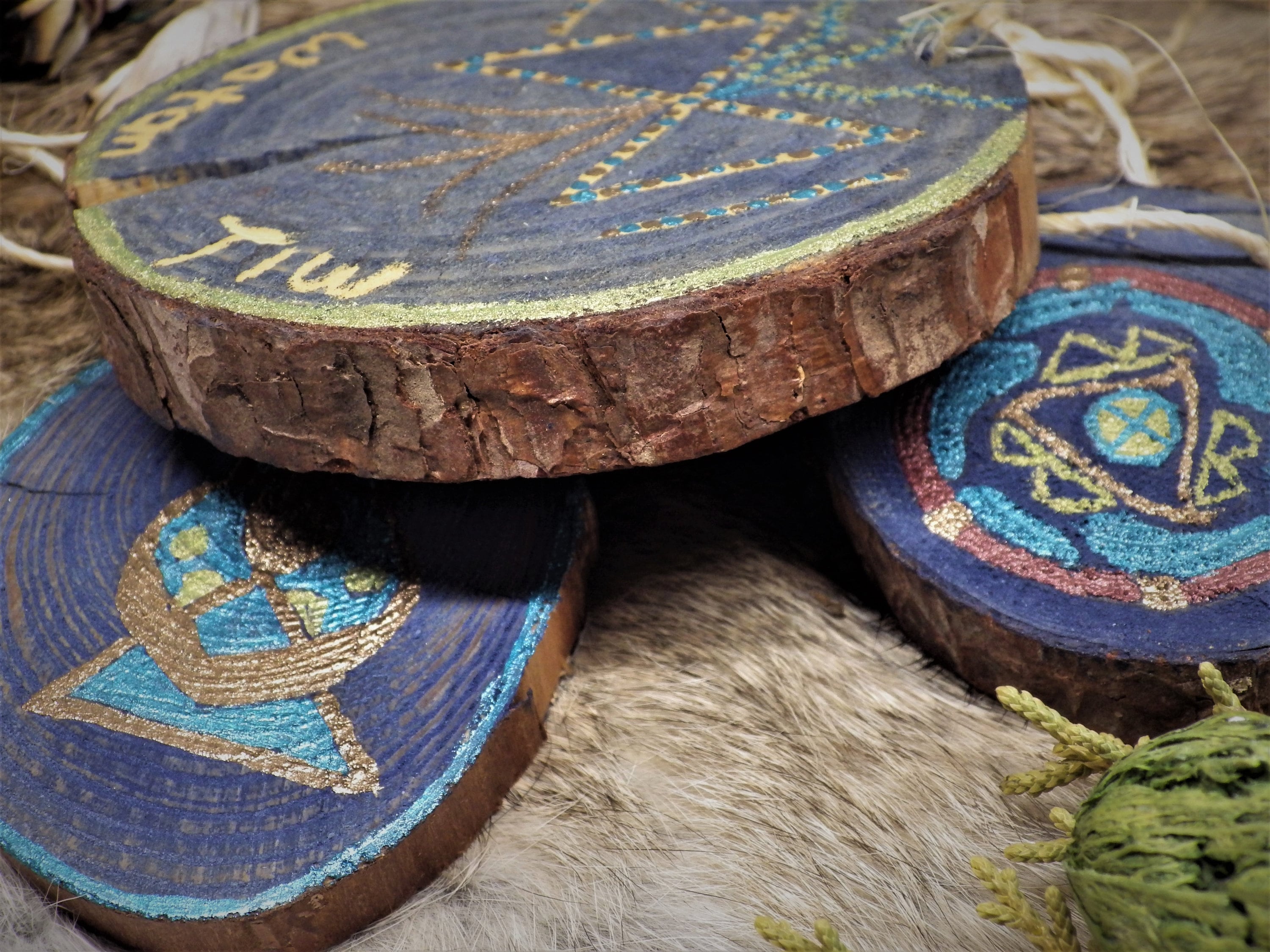 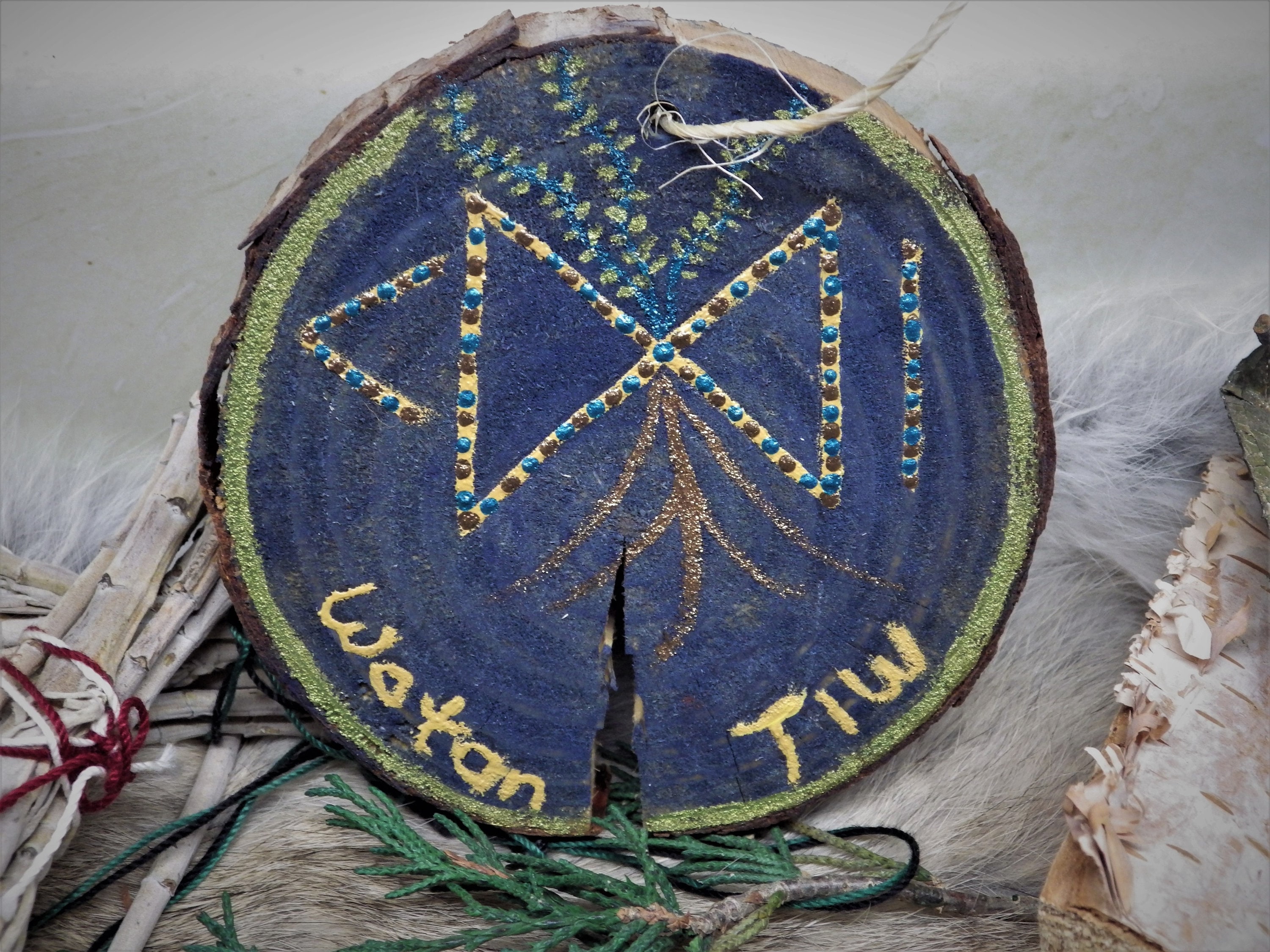 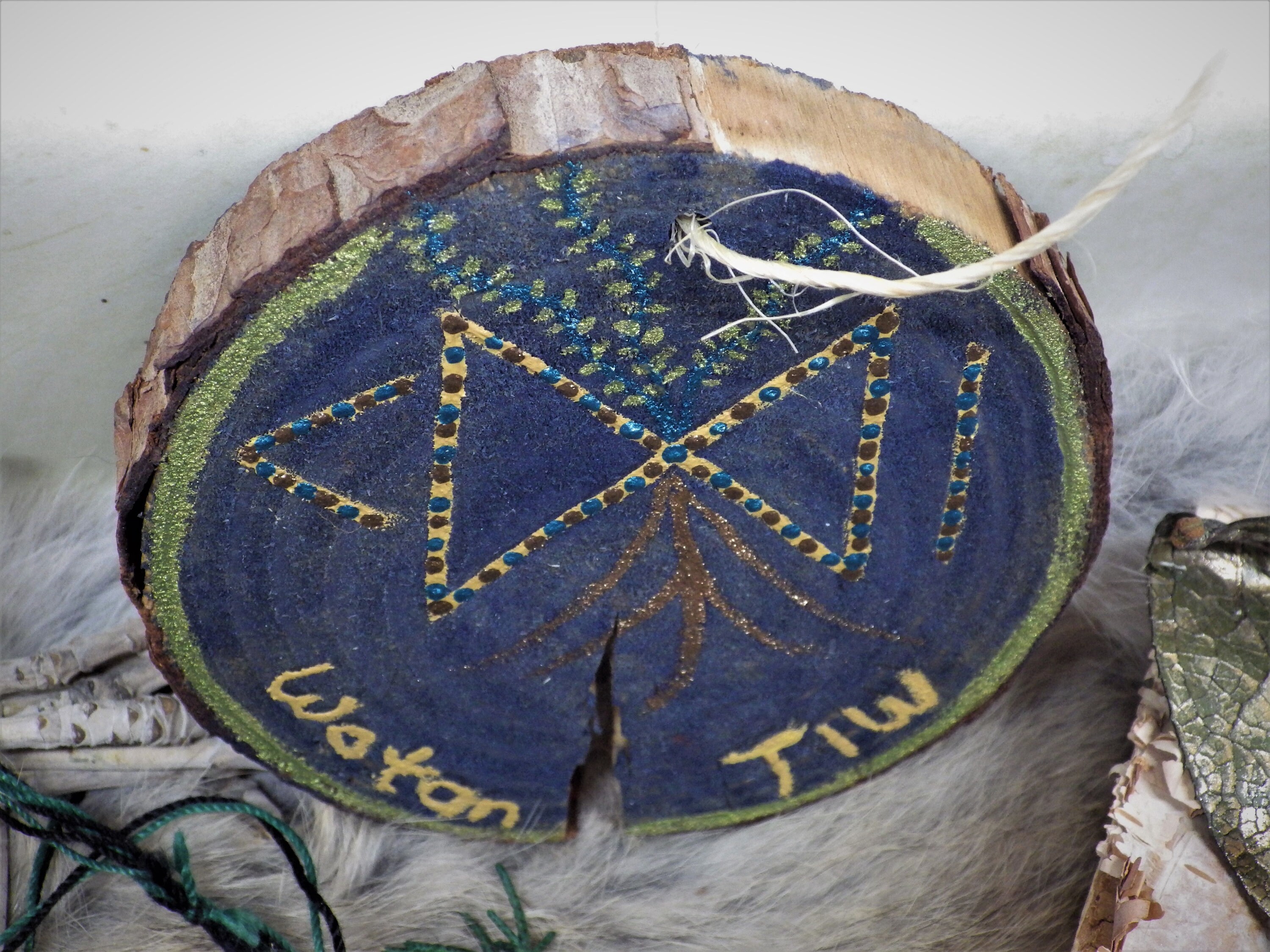 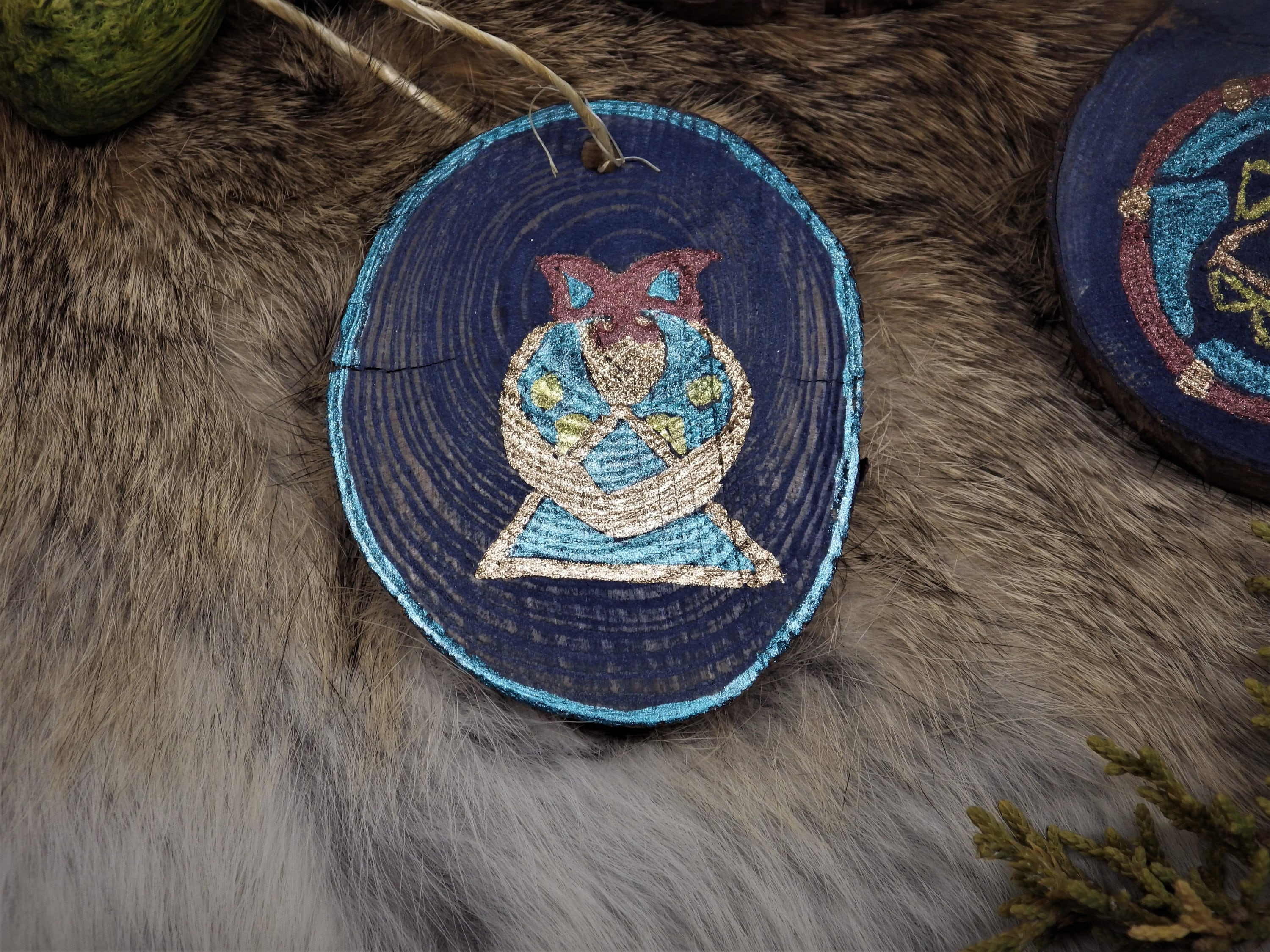 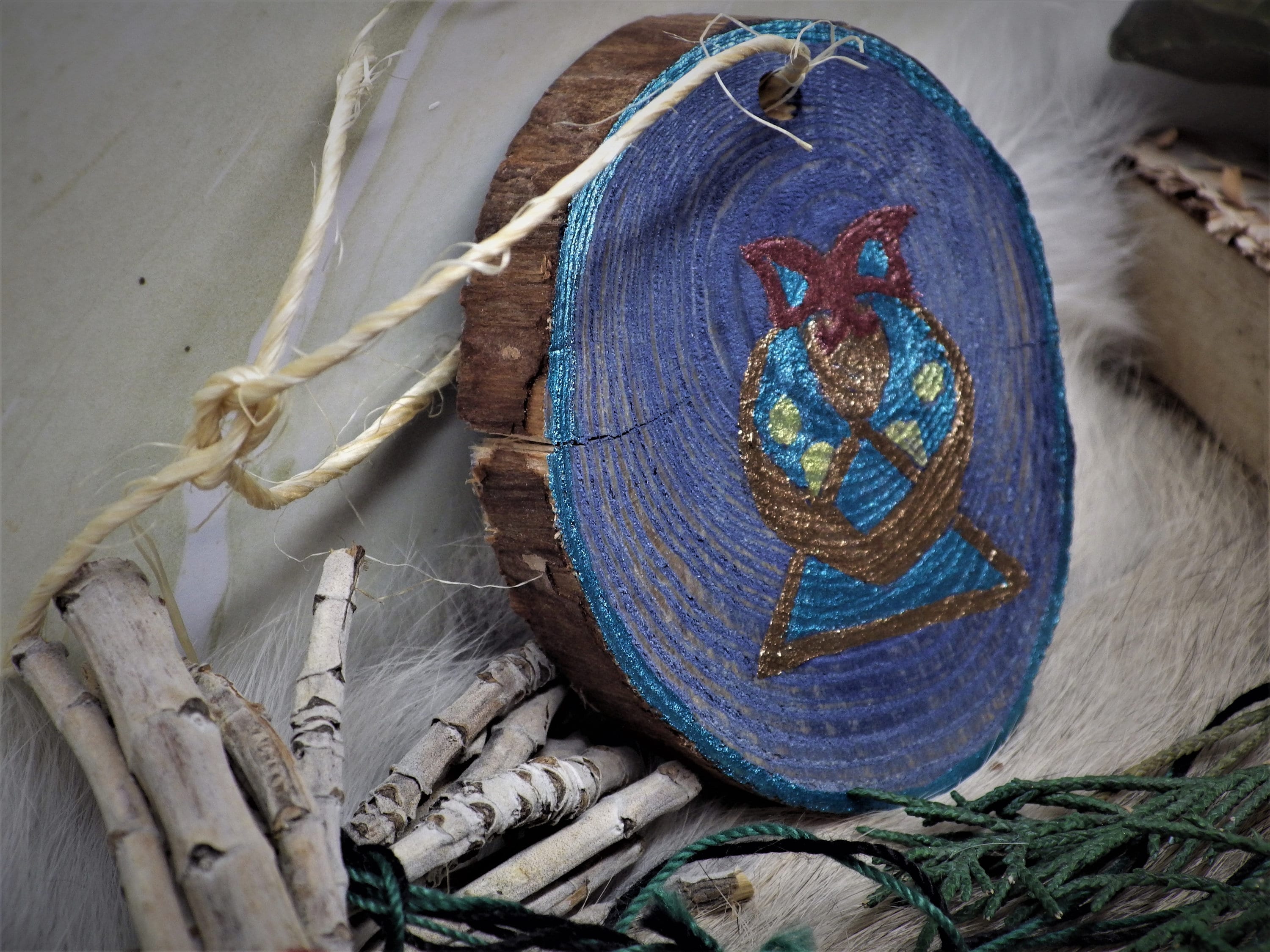 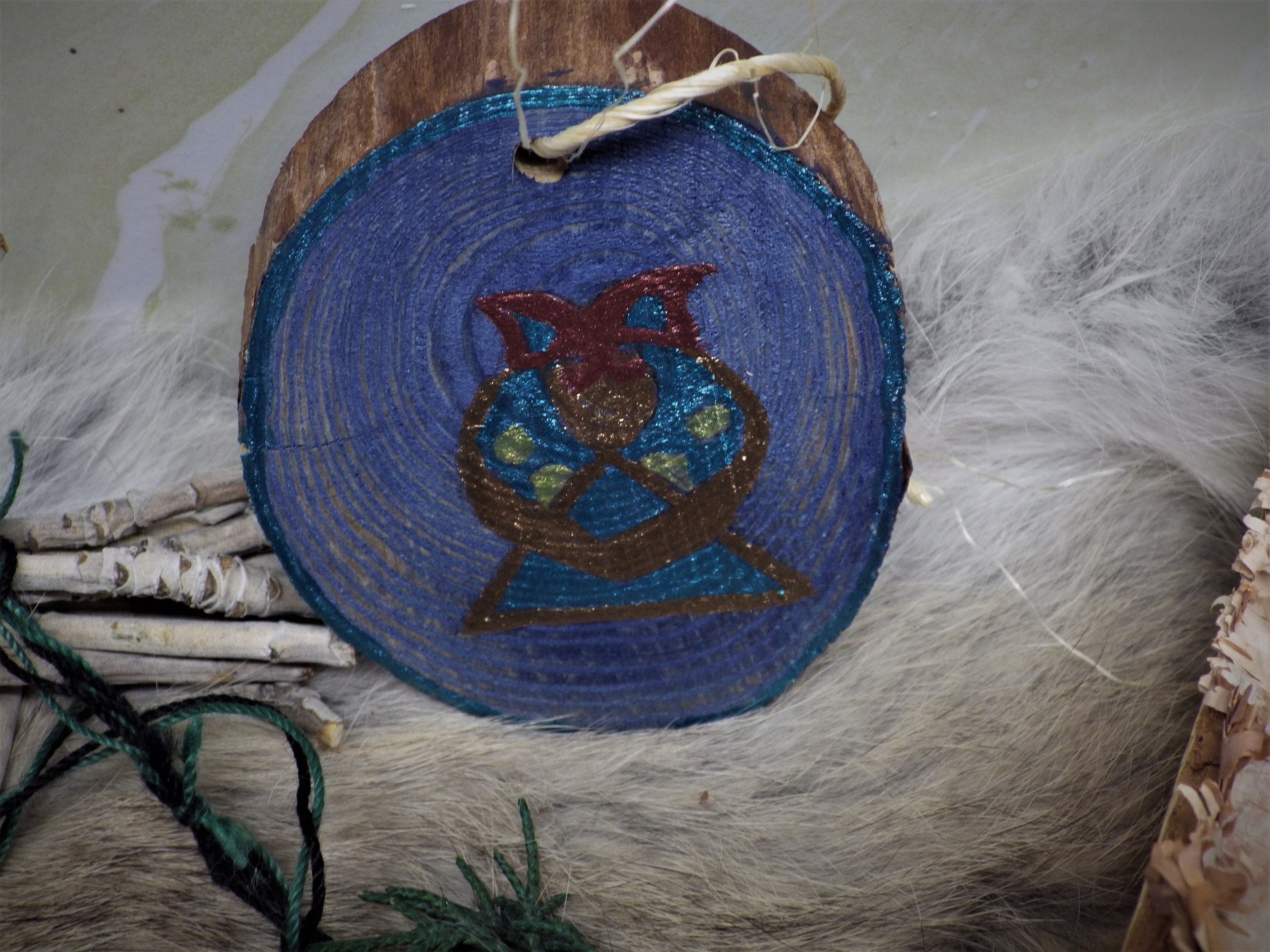 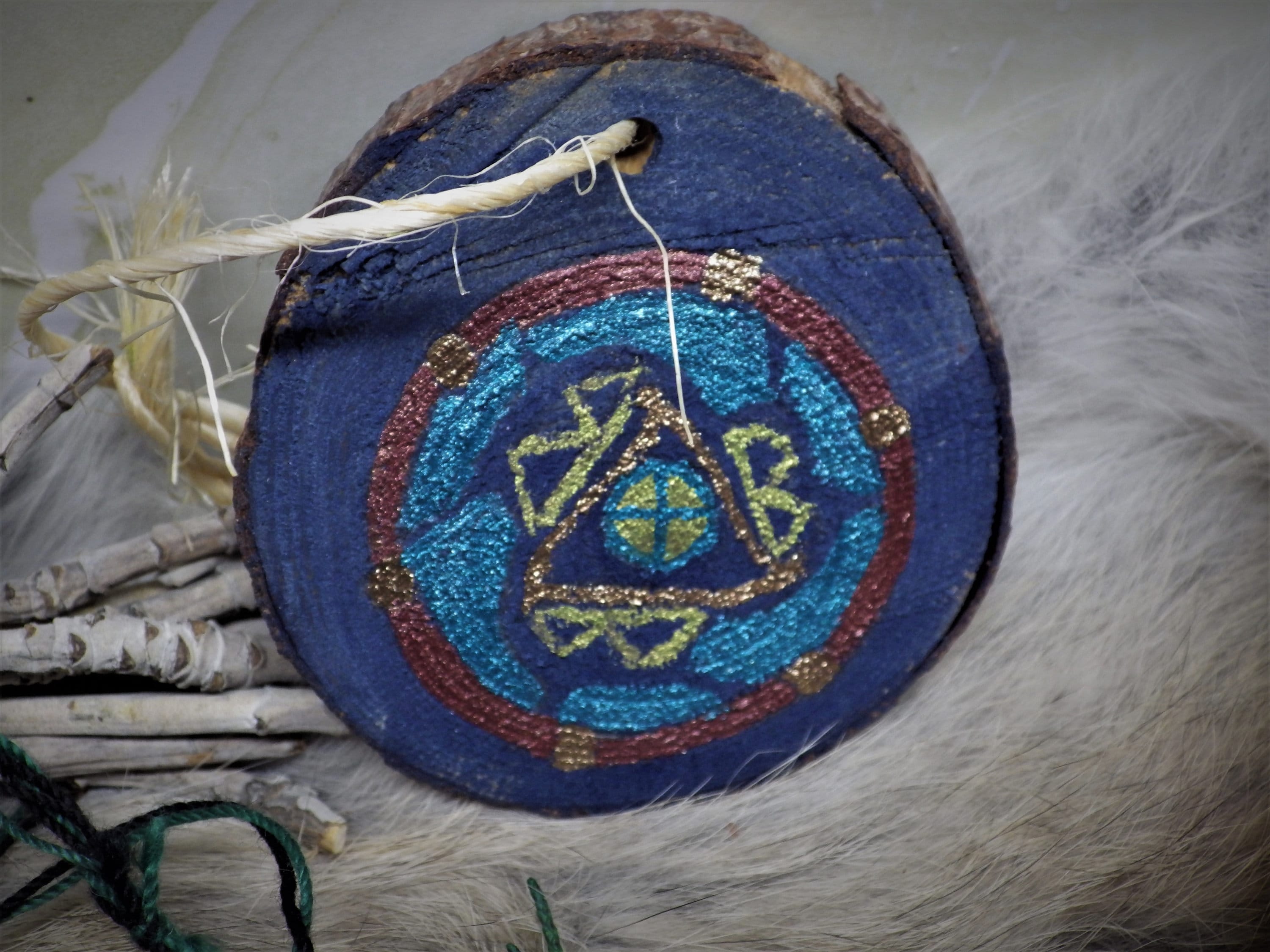 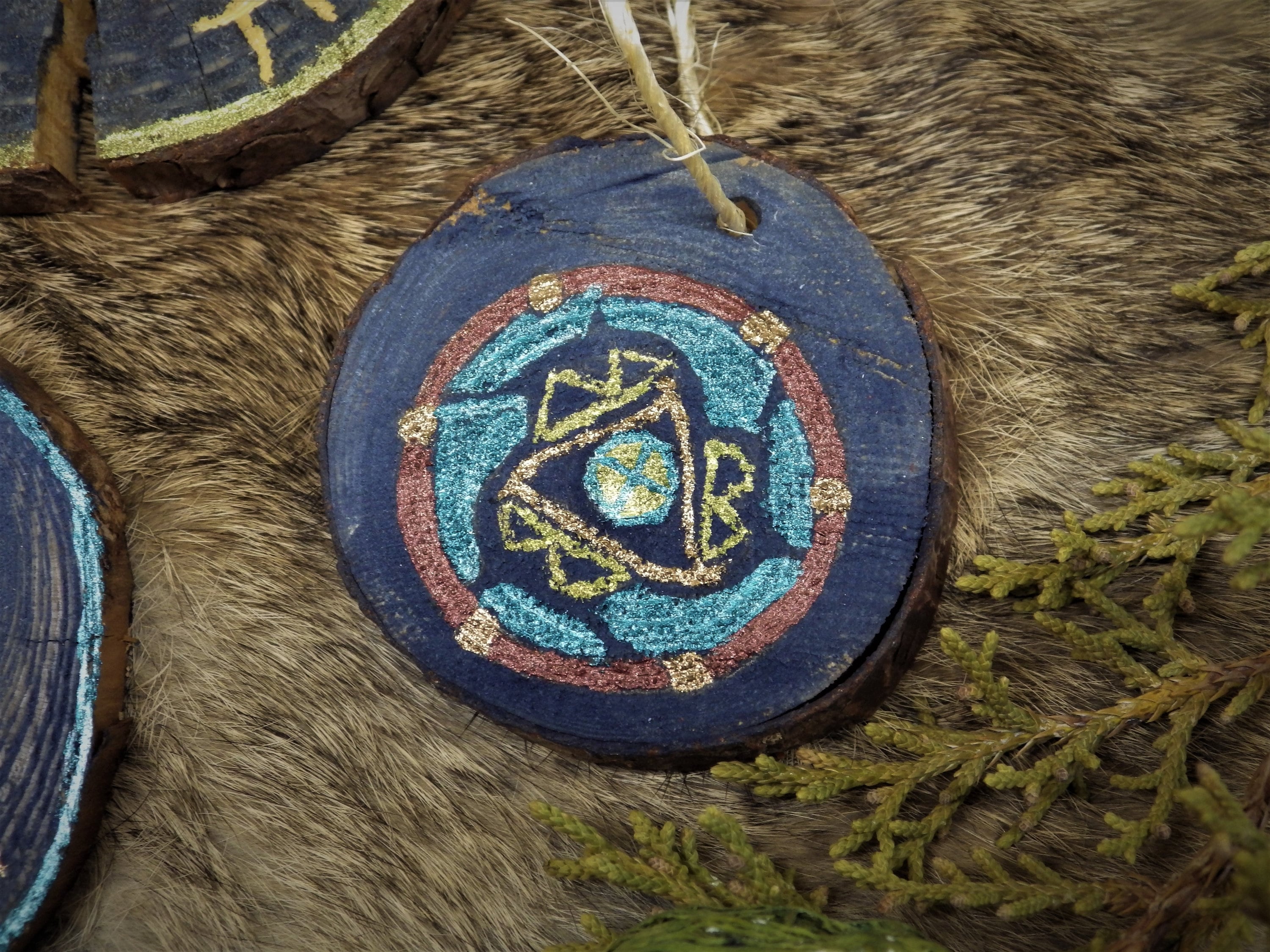 Hand painted Rune Pendants for Transformation -
Within these discs are contained the ideas of transformation, growth, death and growth again.

Lg Disc: Often we find ourselves sitting on the fringes of opposing views, thoughts or emotions. If we sit with these long enough and as we walk through our circumstances we can become aware that out of these opposites comes a third thing that contains both but is neither. It comes into it's own existence, a third thing. Let me give you an example through the runes. In the center of this disc is Dagaz. Dagaz represents the concept which I am speaking of, that on each side is an opposing thought, concept or event but when these begin to turn quickly the form of a third completely independent thought, idea or event takes shape. On the left side is Kenaz or the torch. Kenaz represents controlled, creative fire as in a hearth, harrow a forge or a pyre. The hidden concept behind kenaz is that of dissolution which must take place in order for something new to be formed. Think of taking a tubular piece of metal, heating and dissolving it's shape while hammering into a new form such as a spear head.
On the right side of Dagaz stands Isa. Isa represents the primal ice form, not as Niflheimr but the ice that pulls in the fire necessary to create. Isa represents absolute stillness, non-vibration, the place in our subconscious of absolute quiet where new ideas may come into form. In this place of stillness the fire of creation is pulled toward it to release that new thing. Out of the two primal forces comes a third independent thing, thought or creation.
It is also represented in this piece by the branches and leaves above Dagaz and the roots extending below. Between the branches and the roots exists another life plain which is made up of the thousands of microorganisms which sustain all of life on earth which would not be possible without the life of the tree.

2nd disc - Shield of Freya - In the center of this piece is the solar wheel representing the ever turning cycles of rest, rejuvenation, growth, harvest and death. A constant cycle of growth that propels us ever forward and ever upward in our understanding. The Berkano rune is a conserving, protective force especially useful in transformation rites. Berkano is self-contained and can grow independent of outside force but nothing in the natural world can grow without Berkano force. Berkano can conceal a seed in it's enclosure, break the enclosure and send forth the new creation. It is creative, destructive and nurturing and for this reason is Berkano is all aspects of the goddess Freya. The triple Berkano in this piece is a reminder of the many aspects of Freya which is held inside the circle of the shield.

3rd disc - This design was found on an artifact in Gotland circa 600-650 Animal heads as an inner ornament on a cut-work U-shaped belt attachment.

Items are hand painted and designed with care and reverence for the runic energies it contains. As with all talismans, please take time to recognize and internalize the message to release the energy held in the runes. To honor the gods and the old ways, natural products have been used when appropriate. These talismans are made of natural wood and with acrylics and sealed with urethane for protection.