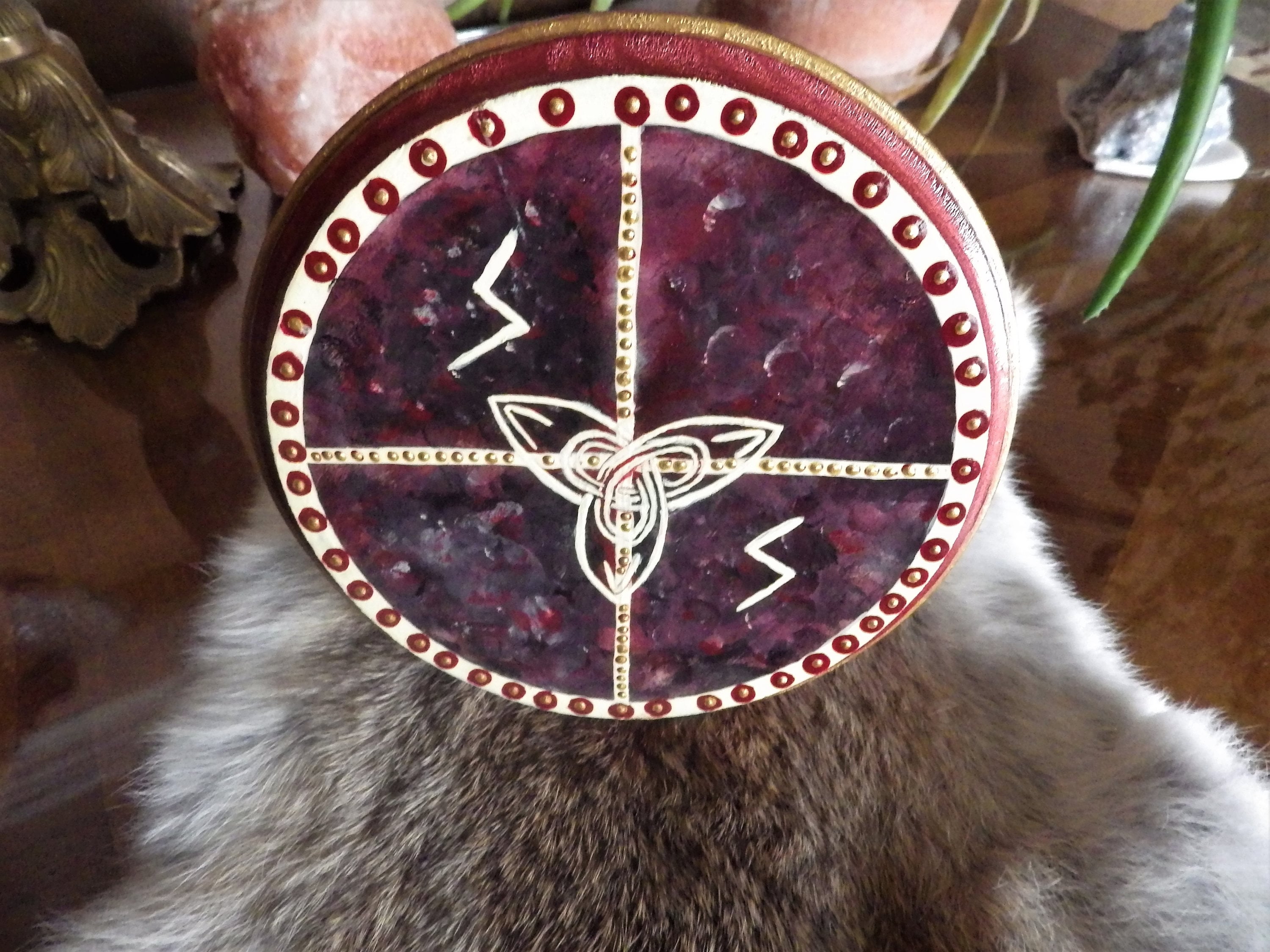 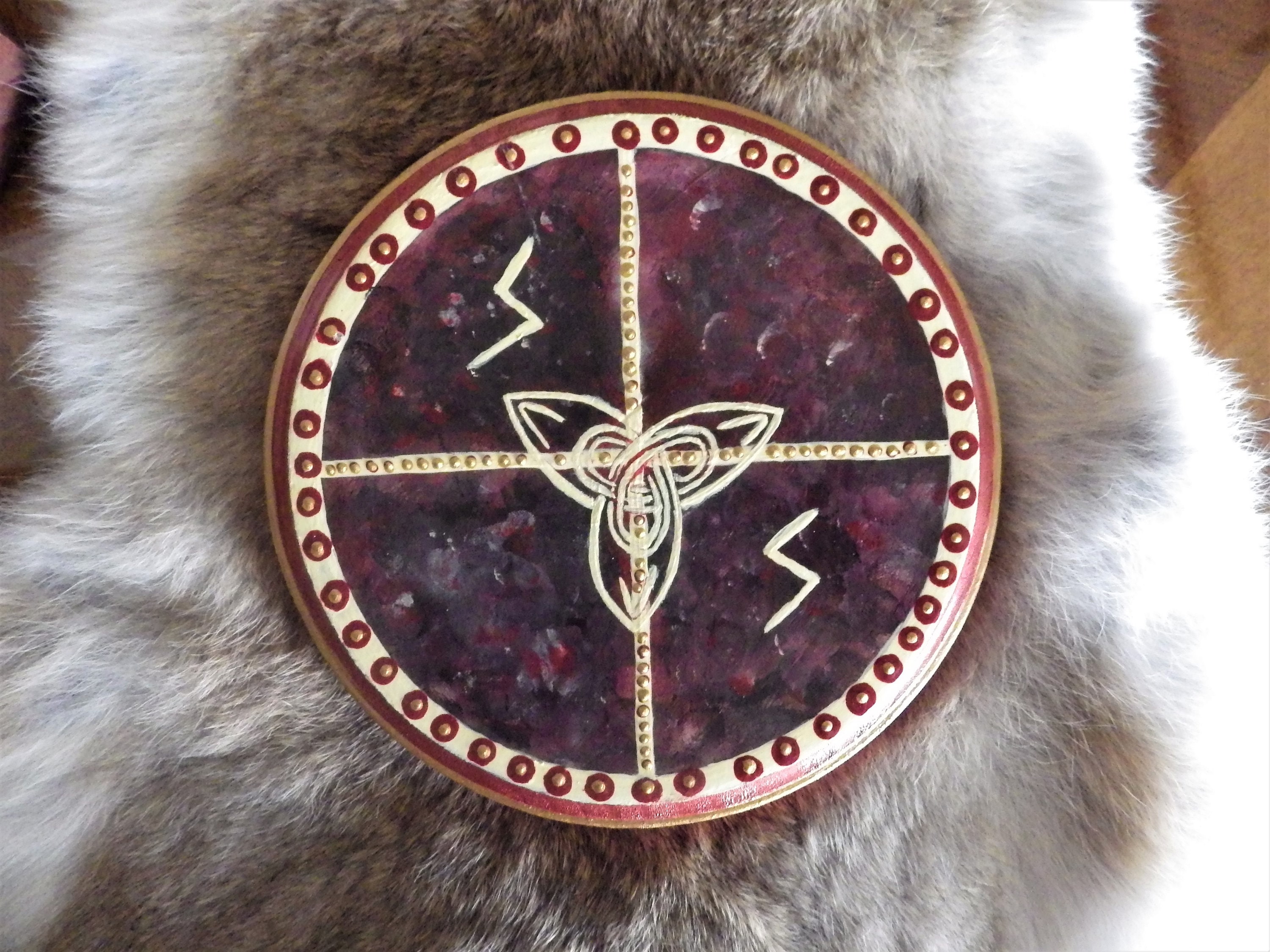 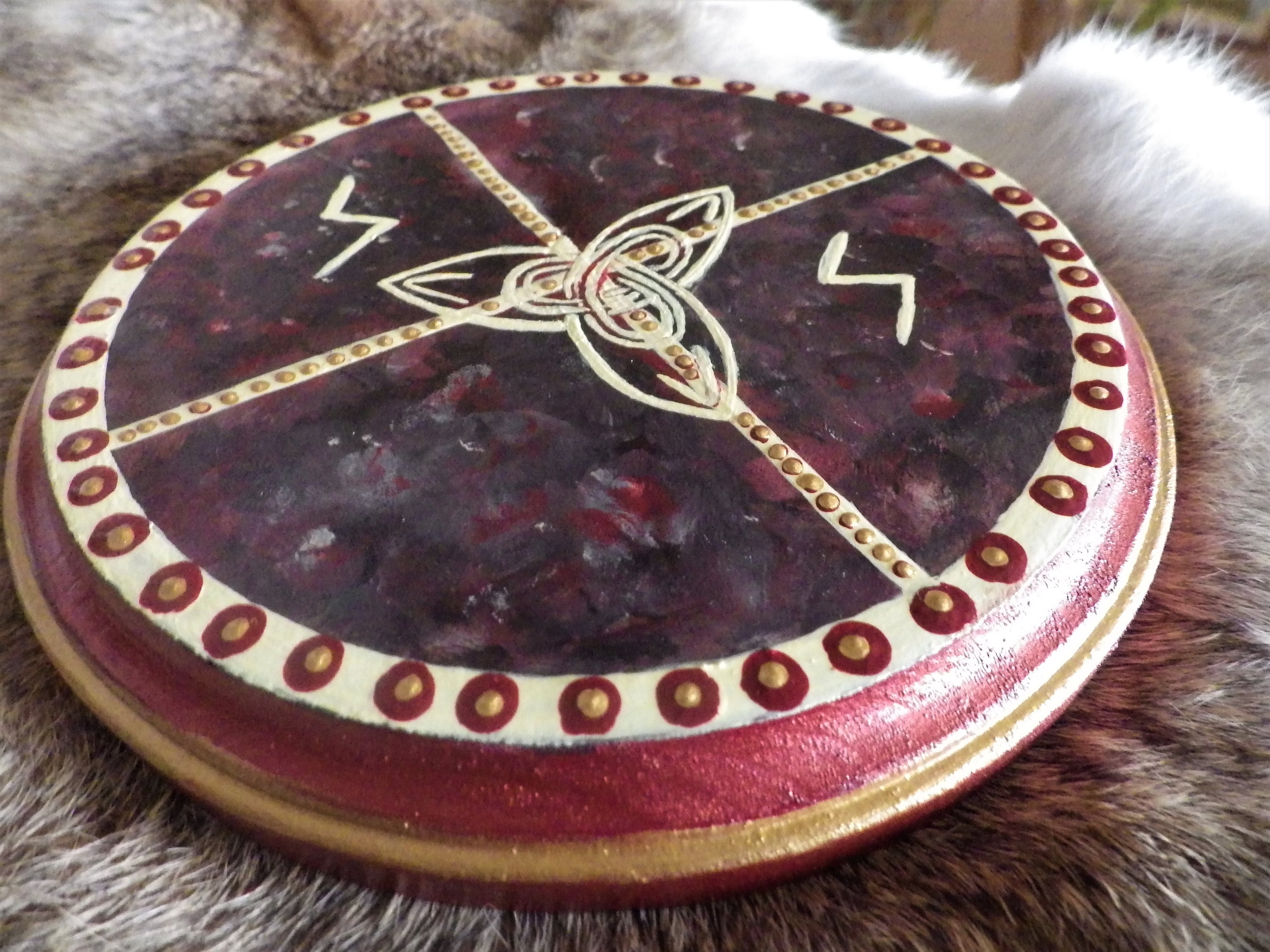 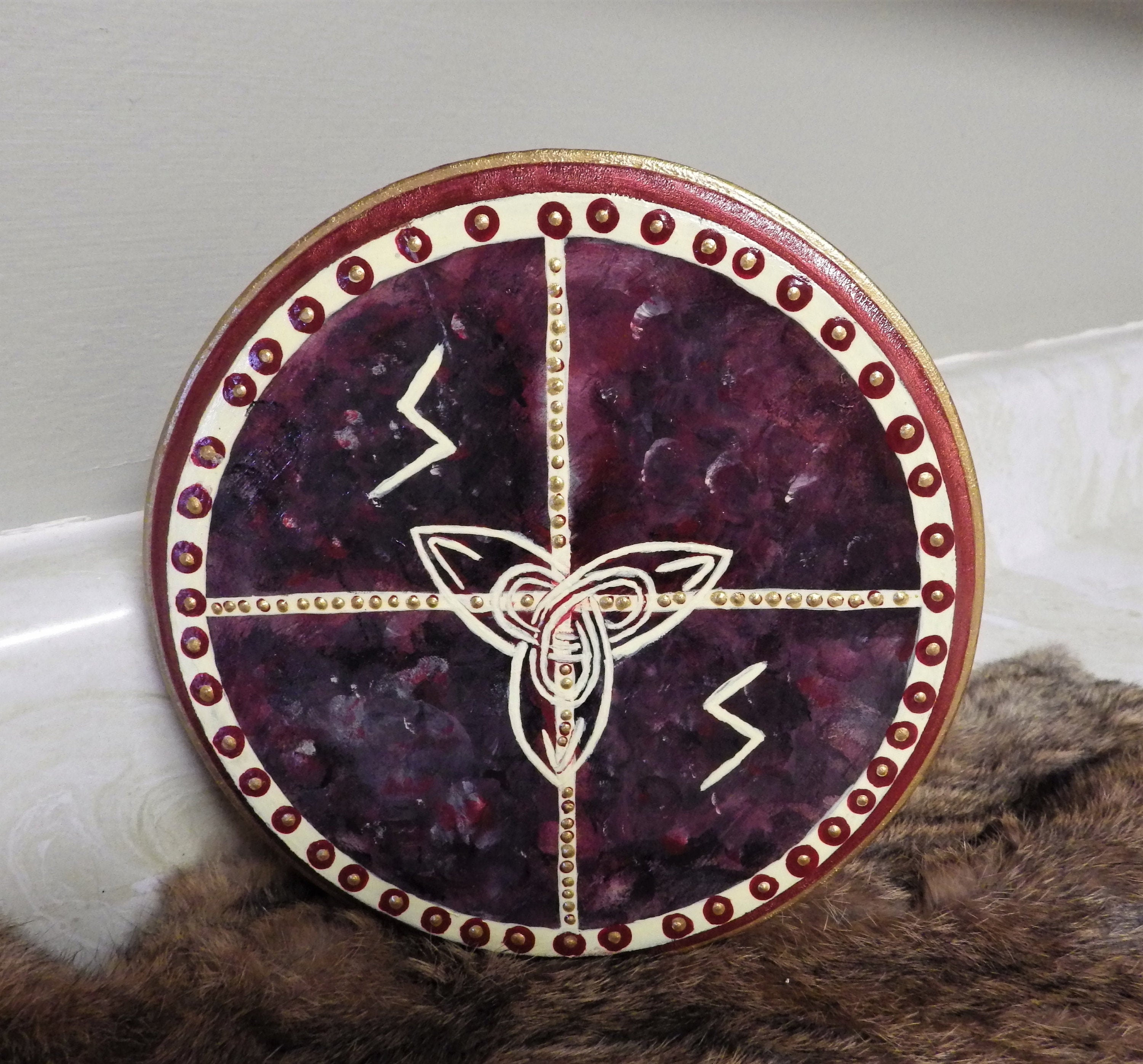 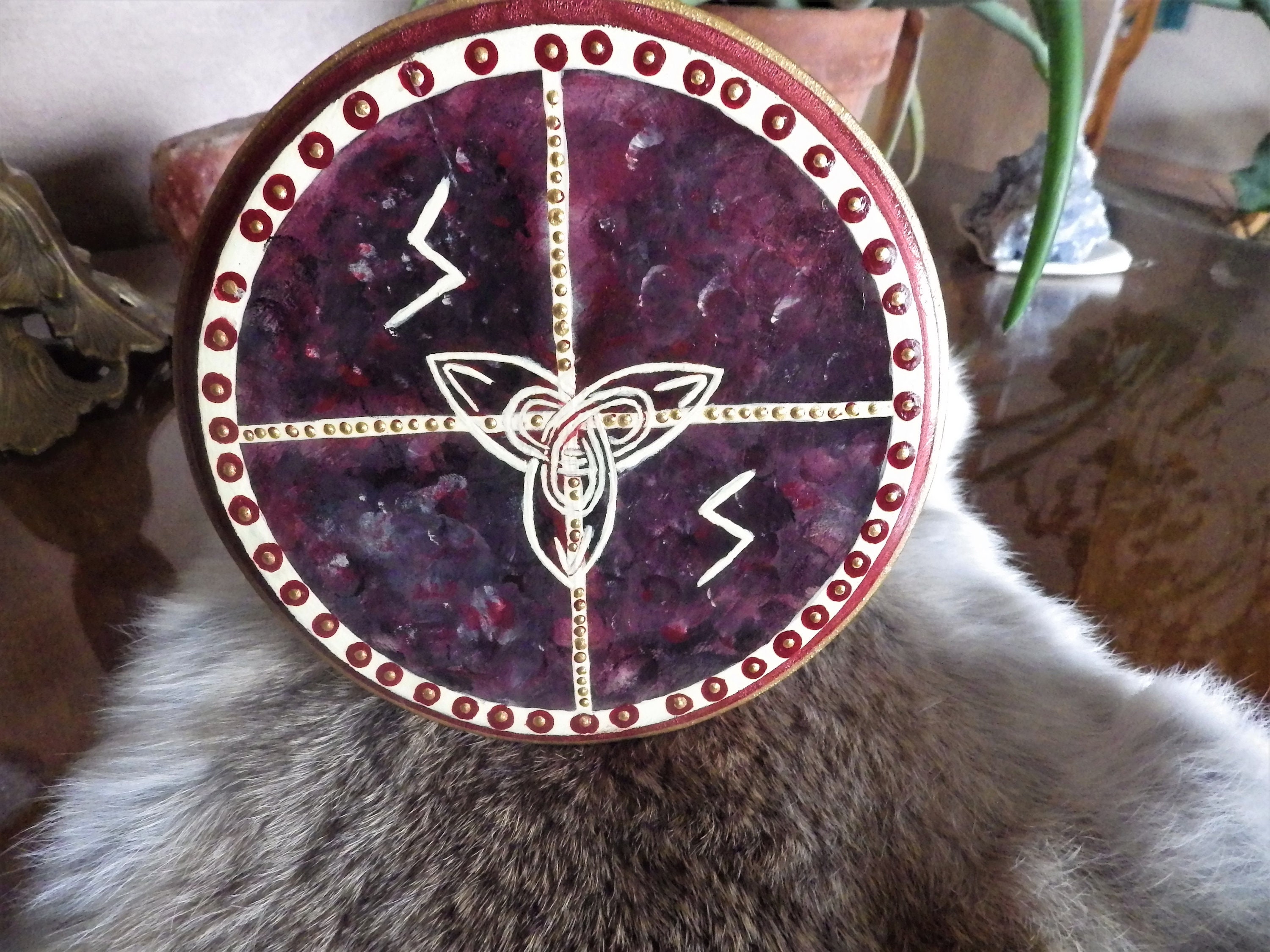 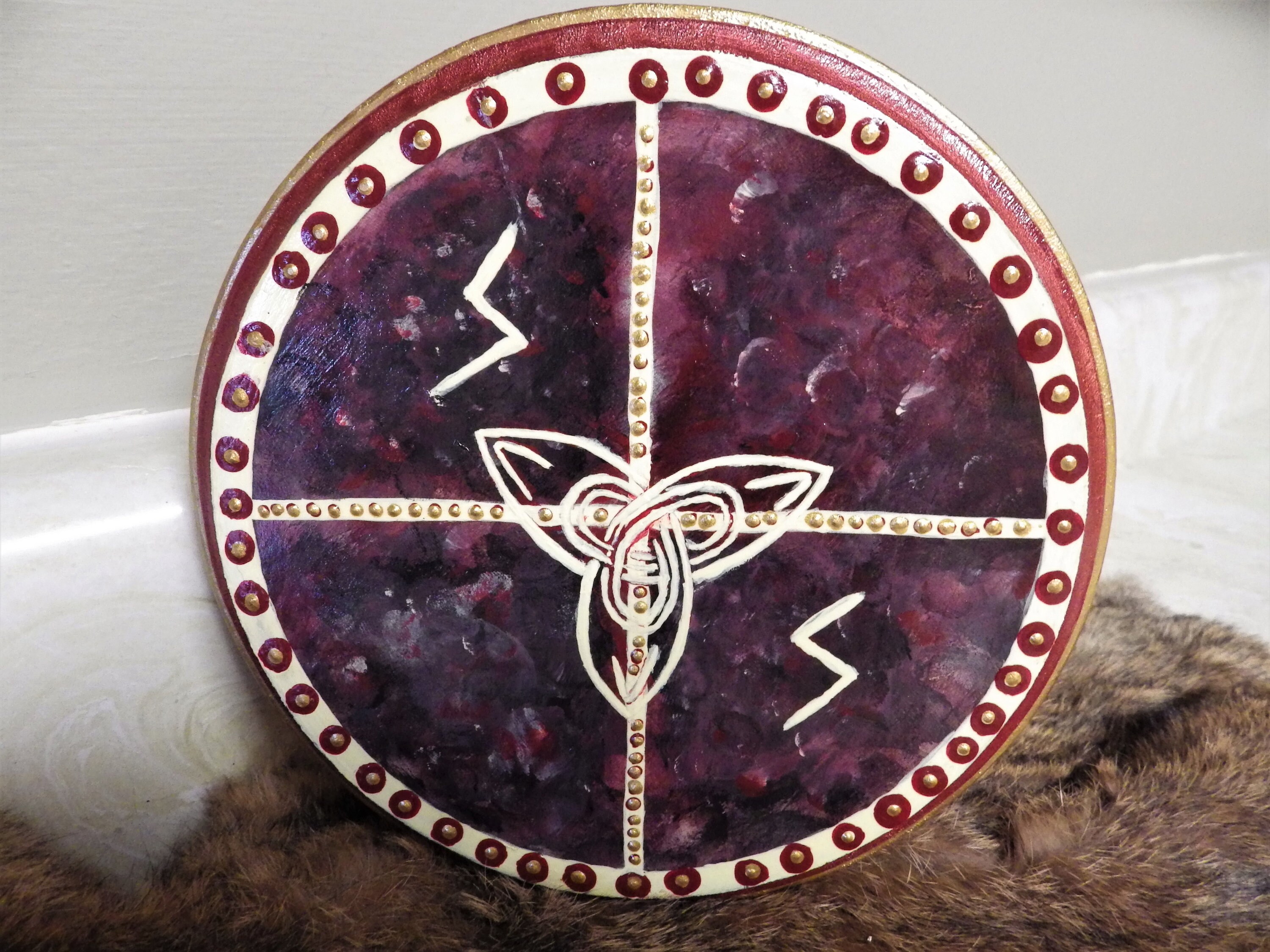 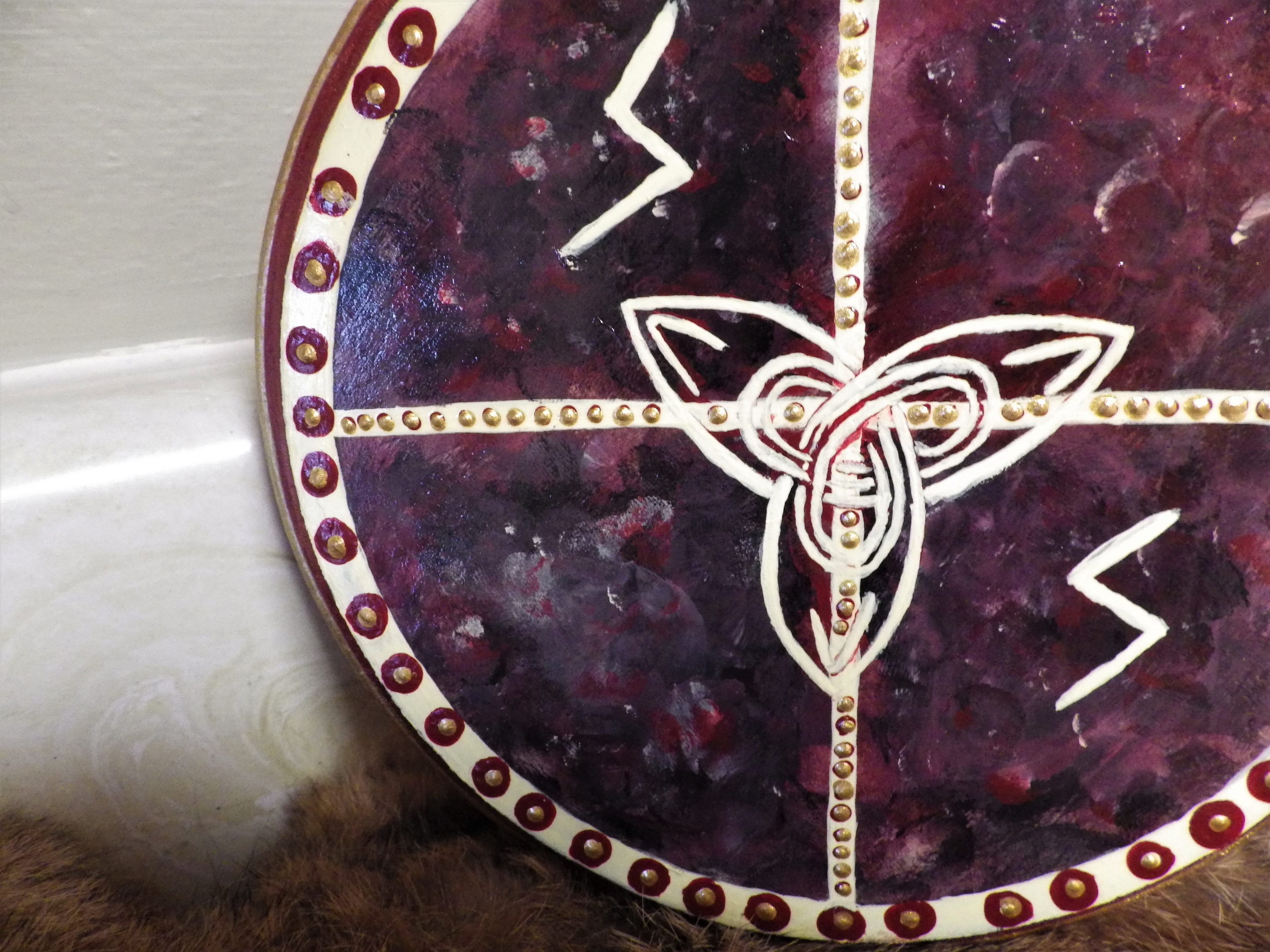 The Shield and The Sword Strength Taufr Altar or Wall piece

The Shield and The Sword Strength taufr helps with focus on personal physical and mental strength to enact will. The shield of protection and the sword are present to keep unwanted opposition at bay.

The solar wheel represents the turning of the year with the four sections representing the four solstices. These sun wheels or solar wheels have been found in nearly every culture around the world as our ancestors knew their dependence on the sun to bring forth the harvest and insure their future survival. In Celtic and Odhinic practices these wheels are attributed to the goddess as the goddess is responsible for fertility and plentiful harvest. Trees are sacred to the Celts and the Odinists and are mentioned in poetry, the Eddas and are inscribed in their art.

Sowilo is the rune of the sun, an active power which either shows itself forth as the whirling of a wheel or as a thunderbolt/sword. In either side of its being, sowilo rune shows the invincible power of the will and triumph. The Old Norwegian Rune Poem shows sowilo as a ruling power and the light of life. It is used to strengthen the active, magical will, making it an invincible and unstoppable force. Both it's shielding and its striking capabilities are bound up in this action; nothing can assail the fully developed will, and nothing can withstand it.

Uruz is the rune of the powerful unconscious-shaping energies of the universe which can only be guided by the wise-one. The rune poem links the stave to the process of purification and shaping embodied by the cow Audhumbla and the alchemical process of evaporation and condensation. It is the rune of Wyrd as an active force (the upward stroke) and also the rune used to direct the magical shaping will into the Well of Urdhr (the downward stroke). Uruz is the rune by which the vitki rules the "lands" around him/herself, just as the aurochs ruled the moors. It is used to aid in the growth of "wisdom" within you; that is to say, the deep rooted, semiconscious awareness of the patterns of being and the way in which the waters of Urdhr are flowing. It can be used in the personal sphere to bring you courage and physical strength and to enhance your independence and leadership abilities. It is the power by which you can shape the patterns of your weird and by which those patterns are brought forth; it is the working of Wyrd's water, as laguz is the water itself and pertho the Well.

May this taufr bring you strength, protection and wisdom to enact your will and impact your weird. Hail!
Hand painted on pine
Dimensions: 6.75" x 6.75" x .5" 6 oz