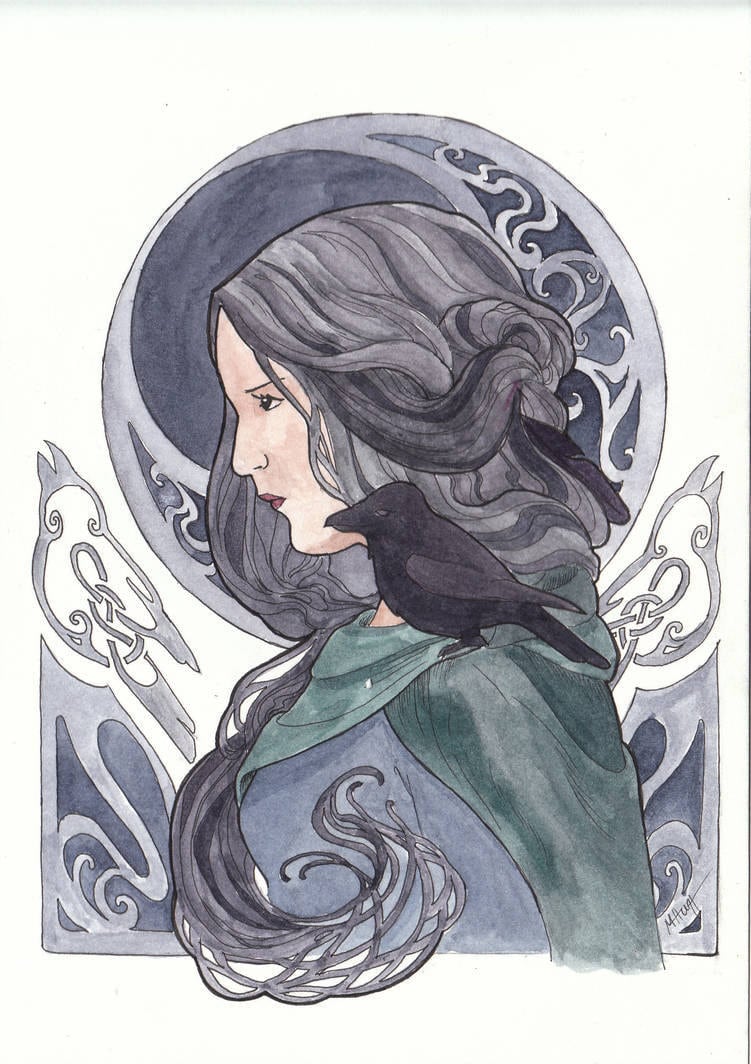 Mighty Mothers of old      Turn our minds toward you!

Wend ye nigh these winter nights!"

This time of year when our thoughts are on the harvest, family, our bounty and our mothers, I thought I would try to bring honor to the Mighty Mothers of Old.

My heritage may be different than yours or maybe my stories were well preserved, but I can tell you that the women I decend from were tough, strong and capable as well as fertile, nurturing and healing.

There seems to be an restlessness between the idea of women warriors, shieldmaidens and the very thought that women were valiant fighters!  I believe that we would be ignorant to think that in all the thousands of generations to pass before us, there was not a shieldmaiden or warrior although it was not the norm.   It is equally ignorant to see the roles of women in history as less than courageous, strong and honorable.  Let me explain from where my viewpoint comes from and the stories in my own family line.

I come from a long line of settlers that imigrated to this country from Scotland and Ireland.  In the old lands of my ancestors I descend from Earls, Dukes, Marqueses, farmers and highway robbers.  All my Mighty Mothers were educated to read, write, understand the law and government, farm, build and survive.

In thinking of how the west was won or how lands were settled or how new community and tribes were established, we forget about the hard work that was involved.  My Mighty Mothers could help build the house, barns and clear the fields for planting.  They cared for the livestock, the home and the children.  They were also excellant marksman (not my own trait).  Throughout my family history there were stories and anectdotes of women who defended their families, their property and yes, even their husbands.  You see the men would go off hunting, fishing, warring or in search of new lands and the women were left to hold down the homestead.  There was a time when one man left and thieves came to claim the property as their own and they were defeated by a women and her children.  There was a time when a man failed to return...ever and the mother held the land and family together to her old age.  Many of my ancient mothers were healers and so follwed the men to the battlefield to cook for them and dress wounds or amputate limbs or bury the dead.  In the course of these events they also took up the sword, the gun or the cannon and continued  the battle when the men fell to insure their own survival and subsequently the survival of their children.

My father raised me the same way.  I had to learn to do maintanence on a home, a car, the land and to understand what the financial requirements were to run a household.  He did this with one thought in mind, there might not always be a man around to save me.  This sounds negative and derrogitory but that is not true of his thought.  In his lifetime he had wittnessed this many times.  Men went into mines and never returned.  They went to war and never came home.  They went in search of work and never came back.  He wanted to make sure that his daughters had the skills necessary to survive.  It had been so for his mother and grandmother and it was so with me.

In ancient times, the times of our great ancestors mother's held a place of honor.  This is documented through the many votive altars found throughout Europe.

" During the Roman Iron Age, 1st to 4th centuries AD, German and Celtic tribes who were either living in or else in close contact with the Roman Empire raised thousands of votive altars with inscriptions celebrating “The Mothers” – Mothers of the tribe, Mothers of federations of tribes, Mothers of rivers, Mothers of towns, Mothers of clans, Mothers of lands, as well as countless “Mothers” whose functions clearly overlap that of goddesses – and they are also often called “deae” – “goddesses” – goddesses of healing, prosperity, justice, fate, abundance, war, truce, pledges, fortune and so on. "

"Because it is a cult of feminine entities called Mothers, it has often been thought that they were part of a “cult of the home and hearth”, mostly attended to by women. But this has no basis in the evidence: In the several cases where the name of the person who raised the altar is inscribed, it is always a man, and the prayers are universal, the Mothers were clearly thought to rule all aspects of existence and equally relevant to men and women."  from Ancestral Mothers and Goddess Collective - The Lady of The Labyrinth

It is also true that women were the incitors of warriors, the authority in her husbands absence and the one whose council was sought concerning the welcoming or turning away of other tribes.  The voice of a woman concerning a man's honor was respected and acted upon.  Women were considered the keepers of the family honor.

"The role of the inciter may be one of the reasons why the status of women remained high in Germanic and Norse cultures despite patriarchy, political male dominance and the central cultural focus on the warrior´s virtues. From the Iron Age tribes in Central Europe to the late Viking sources, we see continuous references showing that a man´s courage and prowess as a warrior was little worth without the appraisal of women, so that Tacitus´ mention of women as the most revered witnesses to a man´s conduct and their “cheerleading” role, as well as their skills with medicine and surgery, is completely within the framework of the general cultural picture."  from Women And War - The Lady of The Labyrinth

The strength, the influence and the abilities of women have been down played, portrayed as evil and down right destroyed through the ages for the very reason that the position, strength, resourcefulness, giftings and influence of a woman is indeed powerful. It is also true that as we chide and degrade men and their masculinity, we are responsible for the downfall.  After all, we are the very instructors and guardians of strong, honorable men!

The Mighty Mothers of my family line were midwives and healers.  It is also true of you no matter where your ancestors came from.  If it were not so they would not have survived to bring us into this world.  From the time they were young, girls were taught about healing herbs, how to forage for these herbs and for food and how to use those herbs in healing.  There were some who were more gifted than the rest and these women were sought after for the most difficult cases.  In addition there were women who were surgeons, setting bones, amputating limbs and sewing up gashes.  We all know the history regarding women and healing and the determined destruction of this vital gift as well as the attack on true feminine strength.

The women's liberation movement was carefully orchestrated to influence women to get them to believe that in order to be powerful, respected and free they had to give up their roles as the Mighty Mothers.  With the mothers neutralized the attack has began on masculinity.  The forced and planned homogenization of our culture in the name of globalization has made us weak, sick, confused and less than honorable.  It will lead to our final destruction.

But we can change this.

We the descendants of The Mighty Mothers.  We the descendants of Frigga and Freya.  We have an innate power, strength, resilliance and resourcefulnes.  We are nurturing, fertile life bringers.  We are the healers, the seers, the moulders and shapers of our families, communities and the world.  It is time we step up to the plate and take on these responsibilities.  It is time to become the next generation of Mighty Mothers and leave a strong legacy for our children.

Hail The Ancient Ones!

Previous Post It's Not Trendy, It Is The Way Back To Right!
Next Post Find The Path To Your Old Ones
0 items in your cart